A Report Card on the Secretary-General’s 5th Year from the Feminist U.N. Campaign

(MARCH 8, 2022)—The Feminist U.N. Campaign has released its latest report on U.N. Secretary-General António Guterres’ commitment to gender equality in the fifth and final year of his first term. After measured improvement in 2020, his grade decreased from a “B” to a “B-” in 2021. There is eager anticipation that the Secretary-General will push for a more comprehensive and progressive agenda that advances women’s and girls’ rights and intersectionality during his second term, 2022-2026. 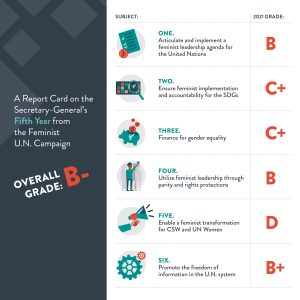 In 2016, the Feminist U.N. Campaign drafted a feminist vision for the United Nations and has graded the Secretary-General on his performance toward that vision over the last five years. Since 2017, the report card has measured the extent to which the Secretary-General advanced progress on six priority areas for a more gender-equitable U.N. system.

“The Feminist U.N. Report card demonstrates how careful analysis, and collective and thoughtful scrutiny can chart a pathway toward a more feminist U.N. The report card plays an important role for civil society, elevating their voices and holding the institution and its leadership to account for meaningful gender equality in its ranks and in its work” said Sarah Gammage, a report reviewer and Latin America Policy Director at The Nature Conservancy.

This year, the Secretary-General’s performance declined considerably in four of the six priorities laid out by the Campaign: (1) Articulate and Implement a Feminist Leadership Agenda (2) Ensure Feminist Implementation and Accountability for the SDGs (4) Parity and Rights Protections (5) Enable A Feminist Transformation for CSW and UN Women. Meanwhile, there was some improvement in (3) Financing for Gender Equality and (6) Promote the Freedom of Information in the U.N. System.

The report authors found overarching themes included a lack of systemic accountability, inconsistent transparency with information and access, and a limited understanding or push for intersectionality in gender initiatives.

On Articulating and Implementing a Feminist Leadership Agenda, the Secretary-General has done well in reiterating the importance of gender. However, his calls are devoid of actionable commitments or accountability beyond the progress toward gender parity. He uses language that prioritized the protection of women, as opposed to their autonomy, participation, and active consultation in the design and implementation of solutions. Furthermore, references to adolescent girls, LGBTQIA+ rights, disabilities, and harassment were largely missing from the Secretary-General’s speeches in 2021. The Secretary-General must sharpen his intersectional feminist analysis and promote an understanding of intersectionality across the U.N. system, so that it becomes a key consideration in policies, programs and leadership decisions.

The current achievements for the integration of gender across all Sustainable Development Goals (SDGs) – goals set by the United Nations General Assembly in 2015 – have been minimal, at best, and implementation and accountability in regard to SDG 5, which focuses specifically on gender equality, has been limited. According to the report, of the 18 indicators used to gather data on country-level progress toward SDG 5, only two of them have sufficient data to assess progress over time across all countries. The Secretary-General must push member states to accelerate progress to collect the data needed to track all SDG indicators. 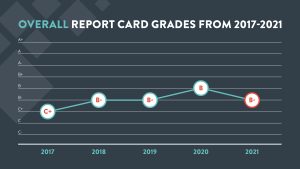 On the topics of Rights Protections and a Feminist Transformation for CSW and UN Women, there was a concerning lack of accountability and transparency in 2021. Progress stalled on responding to sexual harassment, exploitation and abuse in the U.N. system. Despite the implementation of new disclosure processes, key informants reported that staff remain disillusioned with the U.N.’s “macho culture of impunity,” are profoundly mistrustful of reporting and justice mechanisms in the system and are fearful of retaliation. Additionally, the closed-door process for the selection of UN Women’s new Executive Director, Sima Sami Bahous, is considered a major misstep on the part of the Secretary-General toward a feminist transformation.

Guterres’ score increased in Financing for Gender Equality and Freedom of Information due to the application of the gender equality marker system to additional funds and collective efforts to promote access to data, resources and meetings through virtual platforms.

In his second term, 2022-2026, the Campaign urges Guterres to centralize intersectionality, defend human rights, take action on structural and systemic change, and advance gender across the entire U.N. system. As one informant commented, “Talk less, act more …. All words are like feathers in the air.”

“Our 2021 analysis shows that while Secretary-General Guterres has made progress, a lot more needs to be done to foster a truly transformative, progressive, feminist U.N. system. In his second term, we expect Guterres to implement policies further advancing gender equality, intersectionality and civil society access, and to be an unequivocal advocate for human rights.” said Spogmay Ahmed, Senior Global Policy Advocate at the International Center for Research on Women.

About the Feminist U.N. Campaign

The Feminist U.N. Campaign—spearheaded by the International Center for Research on Women (ICRW)—brings together leading feminist thinkers in civil society, philanthropy, academia and former U.N. staff around a shared agenda for women’s rights and gender equality at the United Nations.

Amid unprecedented public and member-state demand for feminist leadership of the United Nations (U.N.), the Campaign released its flagship report in 2016 delineating an agenda for then incoming Secretary-General Guterres.

The Campaign adapted these recommendations into an initial 100-day framework, as well as actions the Secretary-General could implement over the course of his five-year term. These include six key points: (1) articulate and implement a feminist leadership agenda, (2) ensure feminist implementation and accountability for the Sustainable Development Goals (SDGs), (3) finance for gender equality, (4) utilize feminist leadership through parity and rights protections, (5) enable a feminist transformation for the Commission on the Status of Women (CSW) and UN Women, and (6) promote the freedom of information in the U.N. system.

Each year following, the Campaign has issued a report card grading the Secretary-General’s progress against this agenda:

Time for Feminist Action and Implementation

ICRW is the premier applied research institute focused on women and girls. In 2016, ICRW merged with the U.S. research organization Re:Gender (formerly the National Council for Research on Women) to create a global research platform.Headquartered in Washington, DC, with regional offices in India and Uganda, ICRW provides research and analysis to inform programs and policies that promote gender equality and help alleviate poverty.