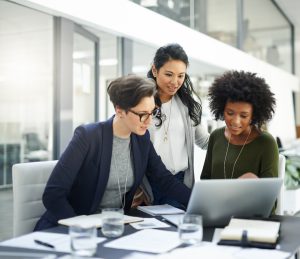 Enhancing inclusion and diversity in your workforce and among leaders requires gender equitable strategies for recruitment, retention and promotion. It also requires building a supportive workplace culture for all employees. Critical topic areas in this value chain segment include equal remuneration, engaging men as allies, mentorship and sponsorship, as well as family friendly policies and practices and reducing unconscious bias.

Globally, companies and organizations are looking to inclusion and diversity because they recognize the social and business benefits. Greater gender diversity in your workforce and leadership (1) improves financial and market performance; (2) increases capitalization of talent; and (3) enhances team performance. Research examples:

Service offerings are tailored based on the needs and background of each client.

Discover where your gender-related strengths and opportunities are, and lay the foundation for a gender action plan to enhance your inclusion & diversity efforts.

Understand the impact your initiatives, programs and policies are having and how to improve them.

Build your staffʼs and managersʼ capacity on critical inclusion and diversity topic areas (e.g., unconscious bias, intersectionality, how to support new parents to reintegrate into the workforce, etc.).

About the client & project:
A large multilateral institution wanted to understand the extent to which its gender action plan was working and how aspects of the existing plan could be improved and strengthened. ICRW was contracted to conduct a diagnostic.

Our approach:
We reviewed internal policies and programs, as well as conducted interviews, surveys and robust data analysis using the institutionʼs existing metrics on gender.

Client benefits:
Our assessment allowed the client to better understand which of its investments in gender mainstreaming paid off, as well as where and how to improve its metrics tracking how gender was integrated in existing lending and operations and to what effect. Our team highlighted that although the human resource department had made significant strides to address gender inequality in hiring, promotion and retention, a culture of gender mainstreaming needed to be adopted throughout the institution, flowing down from the leadership and materializing in targets and mechanisms to promote greater accountability.