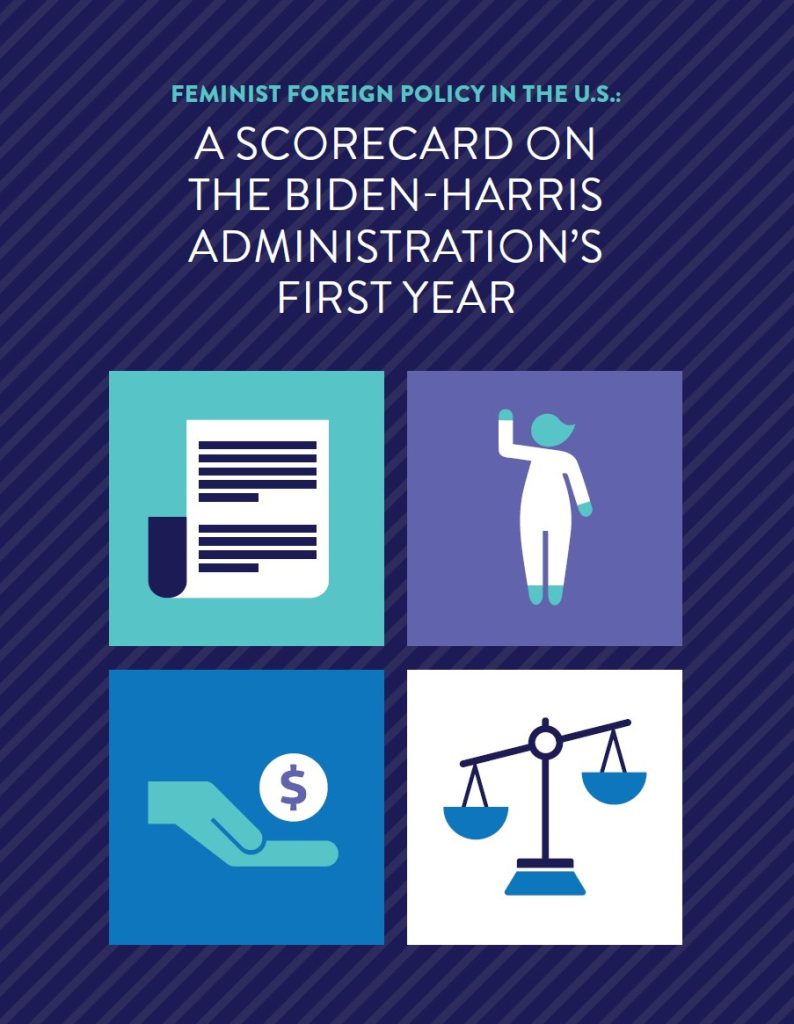 A coalition of more than 80 women’s rights and civil society organizations has released the first annual scorecard to track U.S. progress toward a feminist foreign policy. In their first year, the Biden-Harris administration has taken some key foundational steps and  earned a score of 50%.

“Implementing a full-fledged feminist foreign policy requires changing the systems that perpetuate inequality, and while there has been important progress to date, there is a lot that remains to be done if the U.S. wants to accomplish its goals of returning to a position of global leadership on gender equality, when a feminist foreign policy is the benchmark for that now.” said Aria Grabowski, Deputy Director of Policy and Advocacy at the ICRW and a Coalition leader. “This means shifting structures that historically serve as barriers to progress, increasing personnel and funding to ensure policy change comes to fruition and turning words into action. We know it is unrealistic to expect full implementation within the first year in office – especially given multiple ongoing crises nationally and globally – but the Coalition will look to the administration for more concerted efforts to move our recommendations forward in short order.”

In the first annual scorecard, the Coalition took an in-depth look at four categories of recommendations to track the administration’s progress: policy articulation; leadership and structures; funding; and accountability. In the areas of policy articulation and leadership and structures, the administration has taken action on over 50% of the Coalition’s recommendations against a backdrop of a persistent global pandemic and the economic fallout, political upheavals and other national and global challenges. That said, most of the changes thus far are relatively surface-level. In order to create a foreign policy that is feminist in both scope and practice, the power balances in decision-making must be shifted. And up to now, it is difficult to find a single moment when the Biden-Harris administration has demonstrated that the goal of gender equality was a primary consideration in foreign policy decisions.

“The Biden Administration’s first year set a new baseline for gender representation across the U.S. government, no small achievement amid intense public conflict over how we understand gender in American life,” said Heather Hurlburt, Director for New Models of Policy Change at New America. “Work must now begin in earnest to transform how government does its work and whose voices are heeded at every step, making and implementing U.S. foreign policy.”

Meanwhile, Alexis McGill Johnson, the President and CEO of Planned Parenthood Federation of America, said, “This past year, the Biden-Harris administration had a promising start in advancing sexual and reproductive health and rights around the world — an important aspect of a feminist foreign policy. The administration repealed the harmful global gag rule and vocalized support for its permanent repeal, championed sexual and reproductive health and rights on global platforms, and restored critical support for UNFPA. But the work has only begun. Planned Parenthood looks forward to working with the Biden-Harris administration, Congress, and partners to expand on these efforts and enact a bold feminist foreign policy agenda that centers equity and access to sexual and reproductive health care for all.”

In terms of funding, according to the Coalition’s scorecard, the administration fell far short of commitments necessary to effectively and efficiently implement meaningful policy changes – implementing just two of eleven (14%) recommendations put forward by the Coalition. The administration did very well in terms of accountability, based on what has been feasible in its first year, scoring 100% on the three criteria the Coalition scored.

Taken as a whole, the Biden-Harris administration’s commitments articulated during its first year are signposts that it takes these issues seriously and is working to advance America’s approach to advancing gender equity at home and abroad. However, the administration has not provided sufficient leadership, personnel or resources, outside of a limited scope of gender-focused offices, to make the essential changes needed to implement a feminist foreign policy, or to become a global leader on gender equality. Going into year two, the Coalition calls on the administration to dig deeper and turn rhetoric into action.

“From Afghanistan, to Ethiopia, to the U.S. border with Mexico, women and girls face heightened risk of violence and economic instability,” said Gayatri Patel, vice president of external relations at the Women’s Refugee Commission. “We need the White House to put its full weight behind the Biden-Harris campaign promises to advance gender equality, especially in humanitarian crises. While the administration has taken some important steps forward, the plain fact is that the White House has not prioritized gender equality in U.S. foreign policy, and that has got to change.”

About the Coalition for a Feminist Foreign Policy in the United States:

The Coalition for a Feminist Foreign Policy in the United States is a collective effort to develop a vision for the highest standard of U.S. foreign policy that promotes overarching goals of gender equality, human rights, bodily autonomy, peace and environmental integrity, while prioritizing the articulation of concrete policy recommendations. The coalition has over 80 members to date.

A FEMINIST FOREIGN POLICY FOR THE UNITED STATES: A MEMO TO THE NEXT ADMINISTRATION

ICRW is the premier applied research institute focused on women and girls. In 2016, ICRW merged with the U.S. research organization Re:Gender (formerly the National Council for Research on Women) to create a global research platform.Headquartered in Washington, DC, with regional offices in India and Uganda, ICRW provides research and analysis to inform programs and policies that promote gender equality and help alleviate poverty.

Time for Feminist Action and Implementation