VIOLENCE IN CHILDHOOD IS NEWS!

Adolescents and Youth, Violence Against Women and Girls 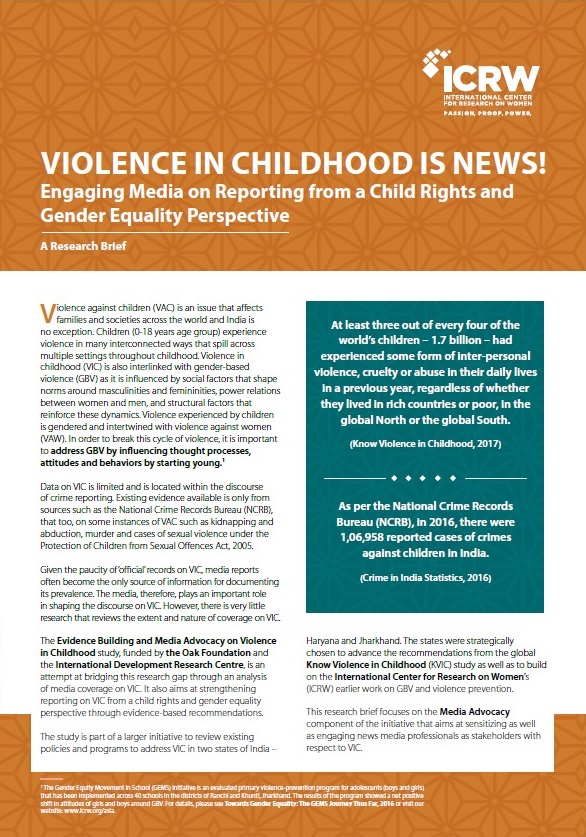 Violence against children (VAC) is an issue that affects families and societies across the world and India is no exception. Children (0-18 years age group) experience violence in many interconnected ways that spill across multiple settings throughout childhood. Violence in childhood (VIC) is also interlinked with gender-based violence (GBV) as it is influenced by social factors that shape norms around masculinities and femininities, power relations between women and men and structural factors that reinforce these dynamics. Violence experienced by children is gendered and intertwined with violence against women (VAW). In order to break this cycle of violence, it is important to address GBV by influencing thought processes, attitudes and behaviors by starting young.

Data on VIC is limited and is located within the discourse of crime reporting. Existing evidence available is only from sources such as the National Crime Records Bureau (NCRB), that too, on some instances of VAC such as kidnapping and abduction, murder and cases of sexual violence under the Protection of Children from Sexual Offences Act, 2005.

Given the paucity of ‘official’ records on VIC, media reports often become the only source of information for documenting its prevalence. The media,  therefore, plays an important role in shaping the discourse on VIC. However, there is very little
research that reviews the extent and nature of coverage on VIC.

The Evidence Building and Media Advocacy on Violence in Childhood study, funded by the Oak Foundation and the International Development Research Centre, is an attempt at bridging this research gap through an analysis of media coverage on VIC. It also aims at strengthening reporting on VIC from a child rights and gender equality perspective through evidence-based recommendations.

The study is part of a larger initiative to review existing policies and programs to address VIC in two states of India –
Haryana and Jharkhand. The states were strategically chosen to advance the recommendations from the global Know Violence in Childhood (KVIC) study as well as to build on ICRW’s earlier work on GBV and violence prevention.

This research brief focuses on the media advocacy component of the initiative that aims at sensitizing as well as engaging news media professionals as stakeholders with respect to VIC.

Click on the image or below to read the brief.