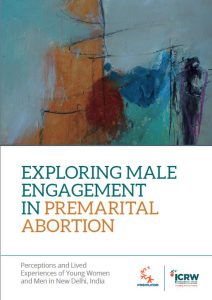 A new report released today from Promundo and the International Center for Research on Women (ICRW) sheds new light on how stigma, social norms and masculine stereotypes influence men’s involvement in decision-making and behavior around abortion with their partners.

In India, unsafe abortion is the third leading cause of maternal death and it contributes 8 percent to all such deaths each year. Even though unmarried women in India have the legal right to abortion, they face challenges because of the secrecy, shame and stigma associated with premarital sex and abortion, in addition to difficulties accessing information and services.

In light of these challenges, as well as a lack of existing research on the abortion journeys of young men and women outside of marriage, Promundo and ICRW conducted a qualitative study to investigate young men’s attitudes, perceptions and experiences as partners in relation to premarital abortion in New Delhi.

The study included in-depth interviews with young women seeking abortions and their male partners, six focus group discussions with young men and young women and key informant interviews with experts and service providers in New Delhi in 2018. To unpack the socio-economic factors that influence the perceptions, attitudes and experiences of young people, participants were recruited from diverse socio-economic contexts.

“For too long, oppressive gender norms have forced women to carry the burden of reproductive health care,” said Sapna Kedia, ICRW technical specialist and lead author of the study. “Our study shows that men want to support their partners when it comes to decisions around contraception and pregnancy. When we engage with men around pregnancy and abortion, we improve sexual and reproductive rights for all.”

The research revealed a number of common themes among the study participants:

“With women’s reproductive rights and bodily autonomy under attack in many countries around the world, this study sheds light on opportunities to improve the quality of and expand access to safe, legal abortion care,” says Jane Kato-Wallace, Promundo director of programs. “Though only conducted in India, the study’s results affirm much of what we already know: that many men can and already do care about supporting the full spectrum of women’s reproductive health and rights, and we should do more to engage them intentionally in our advocacy efforts.”

The findings reveal opportunities to engage with men to expand access sexual and reproductive health and rights for both men and women. Recommendations include:

Men can and must play an important role in affirming women’s access to safe abortion care, as well as be allies in securing full and equal rights for women. In addition to the potential benefits for individual women, men’s involvement as advocates may, at a broader level, advance women’s access to safe abortion and quality care by reducing stigma. Safe abortion with dignity is every woman’s right and is a key pillar of a comprehensive SRHR rights platform.

For more than 40 years, ICRW has been the premier applied research institute focused on gender equity, inclusion and the alleviation of poverty. Headquartered in Washington, D.C., with regional offices in India and Uganda, ICRW works with non-profit, government and private sector partners to conduct research, develop and guide strategy and build capacity to promote evidence-based policies, programs and practices. Learn more at www.icrw.org

Toward gender equity in the household: promoting women’s decision-making and empowerment in Ibadan, Nigeria

ICRW Calls On U.S. Global Health Leadership To Continue Investment in WHO