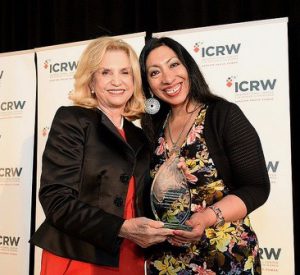 Gracia Violeta Ross Quiroga is the winner of the 2017 Paula Kantor Award. The award was created to honor Paula Kantor, a former ICRW researcher who was killed in 2015 while working in Afghanistan. Paula was a leading expert on gender issues in international development, with nearly 20 years of experience in policy and program research related to integrating gender into agriculture and rural development. Dr. Kantor’s work was largely driven by her passion to improve lives in the global south, especially those of women and girls.

Violeta shares Paula’s dedication to gender equality and to promoting women’s health and rights. She is a prolific activist who has already made numerous outstanding achievements, is a powerful advocate for ending gender-based violence and a recognized global leader in the HIV movement.

Her work was driven by her own tragedy: she is also a survivor of rape and nearly 20 years ago, she learned she was HIV positive. Violeta channeled these experiences into founding the Bolivian Network of People Living with HIV/AIDS, going on to successfully lead grassroots movement calling upon the Bolivian government to grant universal access to HIV treatment.

Like Paula, Violeta has a particular dedication to turning research evidence into action that will positively influence policies and improve people’s lives. One of Violeta’s research projects in particular captivated the panels of judges that selected the 2017 award winner. Violeta conducted public health research that sought to understand the impact violence had had on the bodies and identifies of three groups of women in Bolivia: those living with HIV, female sex workers and transgender women.

Violeta’s took a participatory group approach to her research and used an innovative ‘body mapping’ technique to produce a collective analysis of the participants’ experiences. In her nomination, a colleague noted that “the women felt safe to share their experiences of violence with women whom they knew had had similar experiences. The joint analysis created a sense of solidarity and collective empowerment; the women left the meeting feeling they were not alone.”

Violeta was able to gain sensitive insights into the experience of these three groups of highly marginalized women, while simultaneously fostering empowerment and healing among them, a testament to her skill as a researcher and her commitment to supporting her community. The awards committee is sure she will continue to lead innovative research that will uncover new paths to justice.