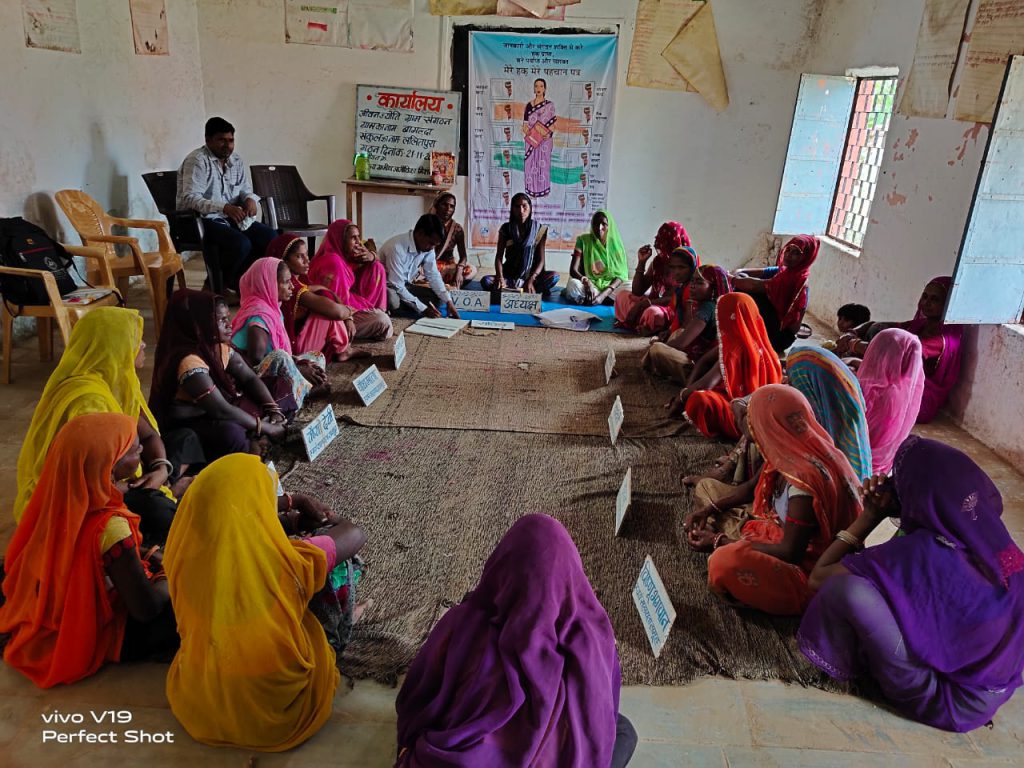 “There were seven families who had walked for days from Jaipur city to my village during the Lockdown. They could not survive in the city because of lockdown and so they had come back. Since they were returnee migrants, they did not have ration cards here and could not get food grains from the PDS shop.[1] For a few days, neighbors helped them. I got to know about this from one of the members of the collective and immediately contacted the families. Then I called the PDS shop owner and told him that he must provide them with ration as per Government directive. Next day itself, the families received their ration from the shop.”

The COVID-19 pandemic and the stringent lockdown imposed throughout India have led to a major socio-economic crisis that includes loss of livelihoods and incomes, reverse migration and increased domestic violence [3]

The Sheopur district in Madhya Pradesh—home to some of the most marginalized communities in India—is one of many across the country where these conditions have exacerbated pre-existing vulnerabilities and created precarious conditions for survival.

In this context, Samta Sakhis (Community Resource Persons focused on gender equality) are playing a vital role in supporting community members and the district Administration—disseminating information, creating awareness, facilitating access to relief measures and responding to situations of gender-based violence and communal disharmony. 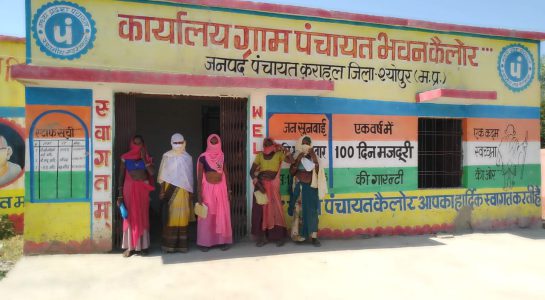 Samta Sakhis are appointed across Sheopur District as part of a program led by a local Gender Justice Program to address multiple issues relevant to the lives of rural women: access to food, housing, livelihoods, land rights, citizenship documents, schemes and entitlements and issues of dignity, security and gender-based violence. The initiative is implemented by the nonprofit organization ANANDI, in collaboration with the Madhya Pradesh State Rural Livelihoods Mission and with support from the Initiative of What Works to Advance Women and Girls in the Economy (IWWAGE).

Samta Sakhis are members of microfinance-based women’s collectives who work actively to spread awareness about gender equality, conduct gender training, and take action to support women’s rights and entitlements. As community members who are themselves part of the collectives, their work strengthens community leadership and community institutions.

At the outset of the pandemic, Samta Sakhis were a crucial element of the response, helping to create awareness and counter misinformation about the disease that was causing panic and suspicion between different communities.

“The phone would be ringing at all times of the day and night. Samta Sakhis located across different villages would be calling to get information about the Corona disease and strategies for prevention, relief measures available in the district, and ways in which they could help women facing violence. They were constantly vigilant, constantly updated about what to do and how.” — Madhu, Project staff, ANANDI

When migrants returned to the village due to loss of jobs and incomes, Samta Sakhis worked actively with the Administration to identify returnee migrants and provide them with quarantine and health resources as well as food and other essentials. They spread awareness about the importance of sanitization, masks and social distancing, and even went to spaces such as banks and ration shops to ensure that these protocols were maintained. They also took the lead with other members of women’s collectives to produce and sell sanitizers and masks, thereby generating livelihoods as well as a steady supply of these goods. When government relief measures such as free ration or direct cash transfers started flowing in, they ensured that there were no exclusions and all eligible families could get the benefits.

“The Panchayat Secretary[4] had brought an ATM machine to disburse the cash from the Jan Dhan Yojana.[5]  However some families did not get the money. As soon as I came to know about it, I spoke to the members of the collective and then talked to the Sarpach (President). The pressure from all of us got immediate results and the Secretary apologized and disbursed the funds at once.” — Hasina, Samta Sakhi

As soon as work was permitted under the Mahatma Gandhi National Rural Employment Guarantee Scheme (MGNREGS), Samta Sakhis worked actively to ensure that women of every needy family had job cards—documents that enable the holder to claim 100 days of guaranteed employment a minimum wages. They were cognizant of the increased risk of domestic violence in this period and kept a watchful eye on the families in their area. If they became aware of any incident of violence, they immediately spoke to the survivor, contacted the concerned authorities and engaged with the family in order to facilitate a safe and supportive environment for the survivor.

The Samta Sakhis thus served as a bridge between the community and Administration, voicing the needs of people, ensuring access to relief measures and holding together the community through constant vigilance, care and support. They adapted to a new normal, maintaining communication through phones, responding to emergencies, passing on relevant information, working with frontline health workers and simply being available for anyone who reached out.

One of the most significant strategies used was an effort to act collaboratively. For every issue, Samta Sakhis reached out to members of collectives and arrived at solutions together. It is this process as well as their responsiveness to people’s needs that have strengthened the presence and relevance of collectives in the communities and expanded their scope beyond financial inclusion to incorporate different dimensions of wellbeing. Samta Sakhis have emerged during this period as leaders and change makers who work not only for people but with people, strengthening one another and their communities.

Recognizing the crucial role that they play, the Madhya Pradesh State Rural Livelihoods Mission has decided to scale up its Gender Justice Program and is appointing Samta Sakhis across 18 districts in Madhya Pradesh. This will certainly be a major leap toward mainstreaming gender through a grassroots approach.

[4] Panchayat is a unit of local governance

[5] Jan Dhan Yojana is a scheme for direct cash benefit