ICRW | PASSION. PROOF. POWER.BlogWhat Fueled the Far-Reaching Impact of the Windhoek Declaration and Namibia Plan of Action as a Milestone for Gender Mainstreaming in UN Peace Support Operations and Where Is Implementation 20 Years Later?

What Fueled the Far-Reaching Impact of the Windhoek Declaration and Namibia Plan of Action as a Milestone for Gender Mainstreaming in UN Peace Support Operations and Where Is Implementation 20 Years Later?

Guest blog by Nina Lahoud, Member of the Board of Directors of the International Legal Assistance Consortium (ILAC) 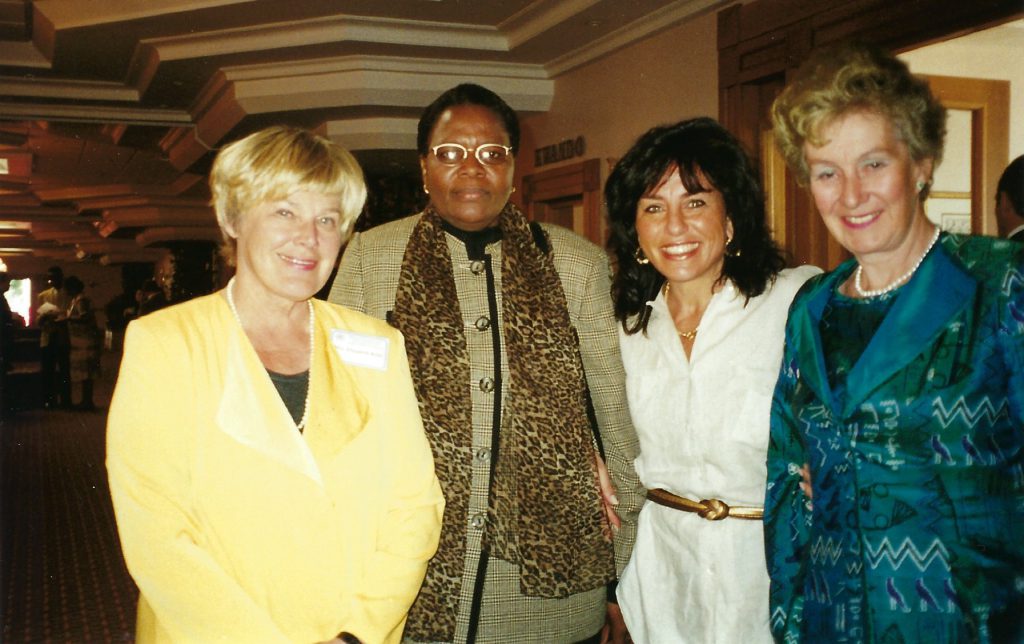 As the world approaches the 20th anniversary of the United Nations Security Council’s unanimous adoption of resolution 1325 on “Women, Peace and Security” on 31 October 2000, there will undoubtedly be many memories evoked of that milestone achievement. After all, it was the first time that the Security Council had ever adopted a resolution that not only stressed “the importance of [women’s] equal participation and full involvement in all efforts for the maintenance and promotion of peace and security, and the need to increase their role in decision-making with regard to conflict prevention and resolution,” but also called for specific measures to be taken by all actors involved to implement those bold commitments.

That unprecedented resolution gave rise to what has become known as the “Women, Peace and Security agenda” and has led to the Council’s adoption of nine other resolutions under that agenda item over the past twenty years.  Unfortunately, though, persisting obstacles and gaps have prevented full implementation of that watershed political framework for promoting gender equality and strengthening women’s participation and rights across the conflict prevention, conflict resolution, peacekeeping and peace-building continuum.

The Security Council itself acknowledged this stark reality just a year ago in adopting resolution 2493 on 29 October 2019, emphasizing that it “remain[s] deeply concerned by persisting barriers to the full implementation of resolution 1325 (2000) and the frequent under-representation of women in many formal processes and bodies related to the maintenance of international peace and security, the relatively low number of women in senior positions in political, peace and security-related national, regional and international institutions, the lack of adequate gender-sensitive humanitarian responses and support for women’s leadership roles in these settings, insufficient financing for Women, Peace and Security, and the resulting detrimental impact on the maintenance of international peace and security.” In confronting that reality, the Council urged Member States “to fully implement the provisions of all previous Security Council resolutions pertaining to the Women, Peace and Security agenda and to reinforce their efforts in this regard,” and requested the Secretary-General to ensure the full implementation of that agenda.

While the 20th anniversary of the milestone 1325 resolution will likely trigger further analyses of its dismal implementation record and what corrective measures are required to execute its calls for action and those of its successor resolutions, there is apt to be less recollection of the factors that influenced the trajectory culminating in its adoption. However, in attempting to develop an action blueprint for the future that can finally lead to much-needed systemic change to build a more secure, just and inclusive society for all conflict-affected women, it would be worthwhile to take stock of a unique event held some 20 years ago that was instrumental in fueling the momentum that led to resolution 1325.

It was in May 2000 that the UN Department of Peacekeeping Operations, in acknowledging that progress in gender mainstreaming was woefully deficient, organized a Seminar in Windhoek on “Mainstreaming a Gender Perspective in Multidimensional Peace Support Operations,” hosted by the Namibian Government, which produced two ground-breaking outcome documents (A/55/138-S/2000/693) that had an enormous impact on the Security Council’s adoption of landmark resolution 1325 five months later. Through the lens of my own first-hand account, my article in the Journal of International Peacekeeping unpacks and scrutinizes the ways in which the Seminar’s visionary Windhoek Declaration and the more operational Namibia Plan of Action came into being and had such a critical impact on that milestone resolution, as well as what specific factors ignited this exceptional outcome, including the role played by the host country. Through this prism, three key factors and the infectious effect of each are described, providing insights into the evolving Seminar dynamics and the interplay of inspiring speakers, Working Group deliberations and strategic plenary sessions. While describing how proud I felt that the Seminar participants had managed to collectively score such a victory for women by producing two ground-breaking documents and plotting a “transmission strategy” that would enlist maximum support of the power brokers at UN Headquarters, I deplore that the progress made since that watershed Seminar and resolution in implementing gender mainstreaming throughout all stages of UN peace support operations has unfortunately been neither systematic nor sufficient.

Influenced by what I witnessed on the ground during assignments to six peacekeeping operations over the course of my career, I point out that this stark reality has perhaps been most anguishing for the countless number of marginalized and vulnerable women in conflict-affected countries across the globe who had hoped that their shattered lives would be uplifted by the promises made in those breakthrough documents two decades ago. In tilting the lens forward, I highlight that those broken hopes were, however, re-ignited by two promising developments in October 2015: (1) the issuance of a sobering Global Study on the Implementation of United Nations Security Council Resolution 1325 that presented 196 recommendations for action required to overcome the many gaps, and (2) the Security Council’s adoption of resolution 2242 with sweeping calls for action to improve implementation of its landmark women, peace and security agenda. Nevertheless, the extent of progress achieved over the past five years has continued to be alarmingly slow in many important areas.

Despite this troubling barometer reading, I still maintain hope that the shamefully sluggish record of 1325-related implementation actions can be reversed and, moreover, that the 20th anniversary of resolution 1325 can be catapulted as a trigger for serious progress and much-needed change throughout this decade. A rallying cry of hope is directed to all those who believe in the need for women to be involved fully as equal partners in all peace and security processes that this struggle can still be accelerated to achieve the results envisaged by those enthusiastic Seminar drafters of the Windhoek Declaration and the Namibia Plan of Action and by those 15 Security Council members who unanimously voted to adopt resolution 1325 some twenty years ago.

To prompt such a course correction, I believe that, at a minimum, strong and principled leadership by the UN Secretary-General is needed to spearhead and assume accountability for three major time-bound measures – as set out – that would accelerate implementation of the outstanding recommendations of the Global Study and of the ten Security Council resolutions on Women, Peace and Security in order to achieve serious progress during this decade. But, in assessing prospects for such transformative and accelerated change, there is a crucial question to be asked by each of us: Will this rallying cry be embraced during the upcoming 20th anniversary commemorations of resolution 1325, and will sufficiently robust and decisive action be taken, with accompanying accountability, to trigger another revolutionary outcome that will bring those much-overdue results?

© Lahoud, Nina J. (2020). What Fueled the Far-Reaching Impact of the Windhoek Declaration and Namibia Plan of Action as a Milestone for Gender Mainstreaming in UN Peace Support Operations and Where Is Implementation 20 Years Later? (Journal of International Peacekeeping, 24 (2020) 1-52).

After leaving the law firm of Shearman & Sterling in 1983 to join the UN peacekeeping force in Lebanon (UNIFIL) as the first woman Legal Adviser appointed to a mission, Nina Lahoud served with the United Nations for over 33 years. She dealt extensively with legal, rule of law, peacekeeping, development, and gender matters while serving in various offices at UN Headquarters and in six UN peacekeeping operations deployed at critical historic junctures in Lebanon (as UNIFIL Legal Adviser), Namibia (as UNTAG Deputy Legal Adviser), Cambodia (as UNTAC Senior Legal Adviser), Croatia (as UNPF Special Assistant to the Deputy Special Representative of the Secretary-General (SRSG)), Kosovo (as UNMIK Chief of Staff to the SRSG), and East Timor (as UNTAET Director/Office of the DSRSG).

While working in the Office of Legal Affairs for over a decade, she handled diverse peacekeeping matters, and then transferred to the Department of Peacekeeping Operations (DPKO) in 1997 during a surge in peacekeeping activity worldwide. She assumed wide-ranging functions in DPKO, including as Principal Officer to the Assistant Secretary-General for Peacekeeping Operations (until August 2016), where she developed proposals for strengthening the gender architecture of multidimensional UN peacekeeping missions and the integration of gender expertise throughout mission planning and assessment processes. She also contributed submissions for the high-level “Independent Global Study on the Implementation of UN Security Council Resolution 1325 on Women, Peace and Security.”

Among earlier assignments, she served as DPKO’s Deputy Director of the Asia and Middle East Division (and the Asia Integrated Operational Team Leader), Special Assistant to the Under-Secretary-General for Peacekeeping Operations, and Head of the Rule of Law Project. She also undertook a number of special assignments with other UN entities, including as Principal Officer to the Special Adviser of the Secretary-General on Iraq, Special Gender Adviser to the Under-Secretary-General of the UN Economic and Social Commission for Asia and the Pacific (where she co-chaired a Working Group on Gender Equality and Empowerment of Women comprising 23 UN regional entities), and Special Peace and Security and Rule of Law Adviser to the Executive Director of the UN Development Fund for Women (where she led the organization, in partnership with ILAC, of two international conferences on gender justice in post-conflict situations).

During special leave from the UN, Nina served as a 2013 Harvard University Advanced Leadership Initiative Fellow and then as a 2014 Senior Fellow (see http://harvardmagazine.com/2014/09/global-charge#.U_KuGb82hP8.email). She holds a B.A. from Harvard University and a Juris Doctorate and a Certificate in Islamic Law from the University of Pennsylvania Law School.

Nina is actively involved in various legal, social justice and gender initiatives, including as a member of a number of U.S. and international professional legal and foreign policy organizations. In December 2018, she was appointed by the Office of the UN Secretary-General as a member of the Advisory Group to the High-Level Task Force on Financing for Gender Equality.  She also serves as a member of the Board of Directors of the Stockholm-based International Legal Assistance Consortium (which provides assistance to strengthen justice systems in conflict-affected and fragile countries), the Advisory Board of PassBlue (an independent digital publication offering in-depth journalism on the US-UN relationship as well as human rights, peacekeeping, women’s issues, and other critical global matters), and the Global Leadership Council of Seeds of Peace (a leadership development organization which brings youth and educators from conflict-affected regions together to  work to create more just and inclusive societies).

[Nina can be contacted at nina.lahoud@gmail.com]

Upholding America’s Commitment to Care at Home and Abroad