ICRW | PASSION. PROOF. POWER.BlogAll postsThrough their own eyes: A photo essay of a clean energy initiative that empowers women

Through their own eyes: A photo essay of a clean energy initiative that empowers women

As I peered out the window of the jeep, I was mesmerized by my surroundings, desperately wanting to take it all in. It was not yet 8:00 am, and Tanzanians passed by me on the roadside, already toiling away at their day’s work. Trees looked like they were bursting with tiny, red-orange fireworks. The hazy, blue mountains rose out of the hillsides like giants. If I looked at them just right, I could almost see them breathing…in and out, in and out. Their stomachs rose and fell with each breath, welcoming Africa’s rising sun. And thus, a new day began in Tanzania.

Baboons crossed in front of us, our jeep careful not to hit them. Women adorned in bright colors and cheerful patterns balanced giant buckets of water on their heads. A few carried parcels of cotton that were bulging at the sides. I waited for the bags to burst and for the snowy cotton to come pouring out, but somehow it stayed put. Solar Sister Grows Strong Women in the Community – SSE, Basila Thomas, writes a receipt for a customer, a skill she learned through Solar Sister. (1)

We pulled up to a clearing where there was a lone, open-air building standing among the trees. A group of women were gathered there, anxiously awaiting our arrival. These women are Solar Sisters, a group of female entrepreneurs who sell solar-powered lanterns, larger solar panels, and clean cookstoves, bringing “light, hope, and opportunity” to hard-to-reach communities that were previously living in darkness. Solar Sister’s business model is similar to Avon’s – a woman-centric sales system where entrepreneurs use their vast social connections and networks to sell products to their families, neighbors and other community members in some of the most remote regions in East Africa. This business model is designed to increase access to clean energy products and to socially and economically empower the company’s female staff and entrepreneurs.

Solar Sister’s mission and the services they provide are critically important because more than two thirds of those in Sub-Saharan Africa lack access to reliable electricity and 80 percent rely on biomass for cooking, which is linked to dangerous household air pollution. However, the growing clean energy market has the potential to bring clean, reliable and affordable energy technologies – like Solar Sister lanterns and clean cookstoves – to the doorsteps of those throughout Africa.

Solar Sister’s business model not only has the potential to benefit customers, but also women entrepreneurs. Women in Sub-Saharan Africa, particularly those in rural locations, often lack access to income generation opportunities. However, entrepreneurial endeavors can provide women with the opportunity to earn money and become active members of their communities. Moreover, research suggests that as women earn higher wages, there is a cascade of potential benefits to their social and economic well-being, translating to better educational, nutritional, health and productive outcomes for their families and communities.

Basila loves the handiwork of this artisan, a Solar Sister customer who uses her solar lamp at night for basket weaving. (2)

As a research organization, ICRW is committed to building the evidence base to understand how women and their communities are impacted by energy access and engagement throughout clean energy value chains. We use this information to help companies and organizations create products and business models that maximize these impacts not only for a greener planet, but also for a more equitable world.

To better understand these impacts, ICRW conducted an assessment to explore how and in which ways Solar Sister’s business model of combining the distribution of clean energy products with entrepreneurial opportunities changes women’s lives. We found that when women are engaged in clean energy entrepreneurship, they see benefits in their own lives, within their families, and even among the broader community. Impacts for women entrepreneurs included increased business skills, knowledge and income (from Solar Sister businesses and other businesses they have been able to grow with the use of the solar products). As a result of their increased income and contributions to the household, women also experienced increased autonomy, decision-making power, self-confidence and status within their households and communities. According to one respondent from ICRW’s study: ““[Community members] see [the entrepreneurs] as the savior because of this light [the solar product] brings.” Benefits experienced by family and community members included improved household economic stability, improved education, health and safety.

Examining the Impacts of Solar Sister 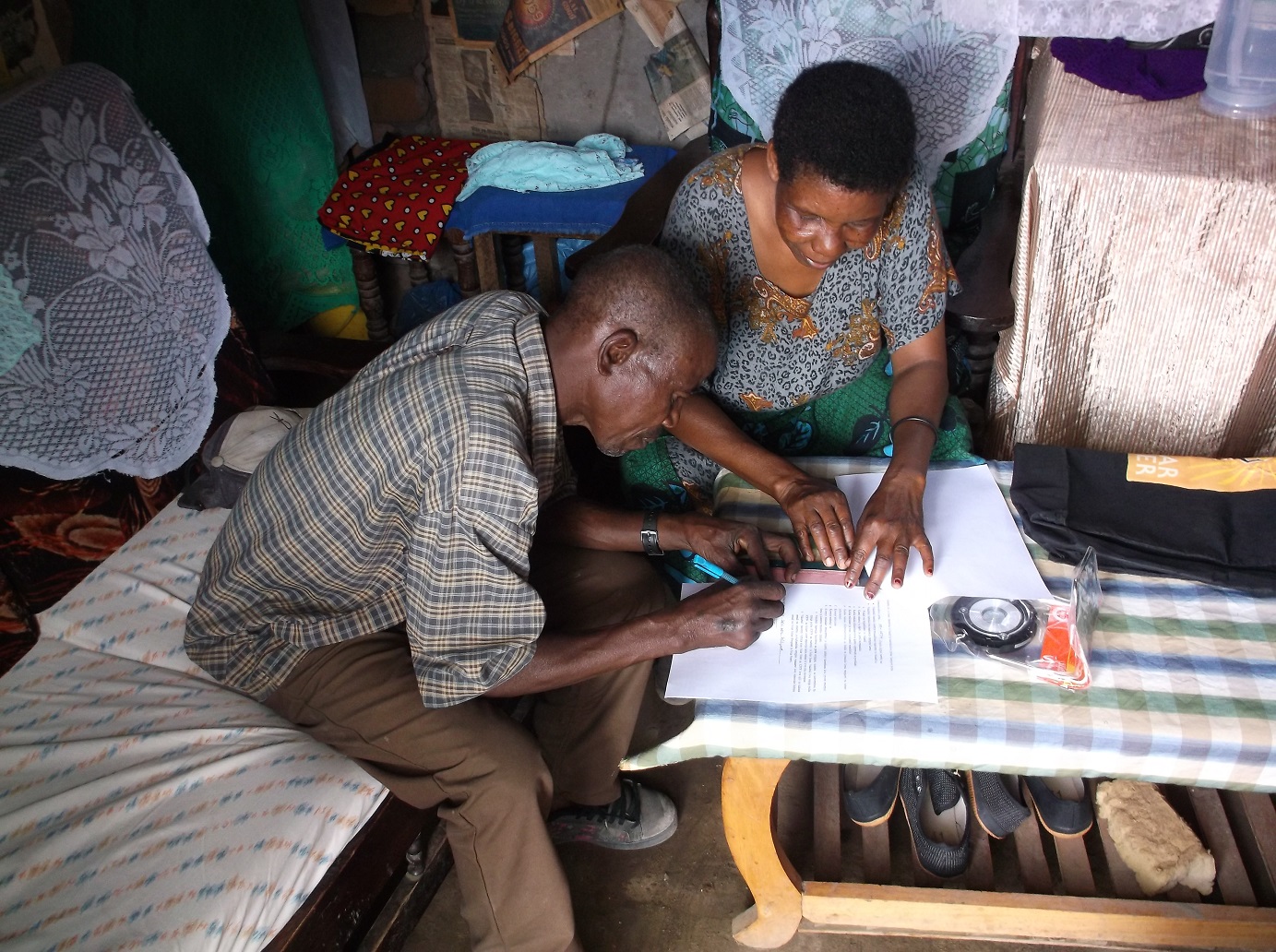 A client signs the receipt book after buying a new solar lamp. (3)

In addition to the more traditional qualitative methods – focus group discussions and individual, in-depth interviews – ICRW used an innovative research methodology called PhotoVoice. PhotoVoice is a participatory research method where participants were taught to use photography to capture the changes they have experienced as a result of their engagement with Solar Sister. PhotoVoice is based on the understanding that people are experts in their own lives; it is a unique method in that it provides participants with the power to decide for themselves what kind of information to share and a dynamic medium to speak out and be heard.

When our jeep pulled up to the sea of orange t-shirts, I could already see the smiles on the SSEs’ faces. I couldn’t understand the women, as they were speaking Swahili, but I could sense their eager anticipation. As we began explaining the PhotoVoice process and the activities for the coming week, the entrepreneurs started giggling, seemingly nervously. My colleague and I continued talking, not wanting to interrupt the flow of the conversation, but the quiet giggling continued, along with some murmurs in Swahili. We finally stopped and asked the translator: “Is everything ok?” “Yes,” she replied. “They are just excited.”

For most of the women, this was the first time they had ever seen or touched a camera. One of the first questions asked was: “Will the flash hurt my eyes?” Despite the steep learning curve to use this new technology, the women caught on quickly. They were not intimidated by the plethora of buttons or instructions, but instead excited by the opportunity before them.

After an initial two-day workshop where we taught the women how to use the cameras and some basic photography techniques, we sent them back into their homes and communities and gave them a week to take pictures. When we came back together for the final workshop, the entrepreneurs could hardly contain their excitement, as they shared their experiences with us. Some told stories of teaching their children, husbands, neighbors, church/choir members and other men and women in the community how to use the cameras. Participants explained that their families now see them in a different light – as “able” – their eyes shining with pride.

The photographs taken by the entrepreneurs were not only beautiful, but incredibly powerful. They depict the lives and experiences of SSEs in Tanzania, as captured by the SSEs themselves. As the photographers told us about each picture – describing why they had taken it and what it represented – we began to understand the myriad impacts that Solar Sister is having on SSEs’ lives, families and overall communities. The pictures showed how Solar Sister has provided female SSEs with new knowledge and skills, including financial management skills, which has improved both their business and personal finances.

The women showed us pictures of the ways in which they are able to use the solar products to boost their existing businesses or to create new ones. They told us stories of how the additional income from these businesses and from Solar Sister allows them to contribute to household earnings and as a result to gain increased autonomy, decision-making power and status within their households and communities. Their words and pictures show that Solar Sister’s business model of giving women access to energy combined with an entrepreneurship opportunity truly does result in empowerment.

A Solar Sister customer weighs out the cotton she has been able to harvest with the help of her solar lamp. (4)

SSEs also photographed the ways in which their families and communities have been positively influenced by Solar Sister. Many photographs show children huddled over a solar lantern at night. SSEs explained that having access to solar light allows students to study later into the evening, resulting in better school performance and test scores. Others took pictures showing how income and fuel savings from Solar Sister increases household economic stability and how the use of solar lanterns and improved cookstoves results in better health – fewer emissions and reduced respiratory and eye problems – for themselves and their families.

At the community level, photographs showed SSEs together with their customers. In many cases, female SSEs took photos of themselves with male customers, to depict how, through Solar Sister, women are able to gain status and self-confidence as leaders and those who bring new technology to their communities. Other community-level impacts that were captured through the photographs include sisterhood among female SSEs, business growth, and safety for community members of all ages who use the lights to travel safely at night as well as for household tasks and community social events and ceremonies.

PhotoVoice is a powerful tool that allowed Solar Sister Entrepreneurs to capture and explain some of the hard-to-measure outcomes they experienced such as changes in agency, social capital and empowerment. The SSEs’ pictures helped to bridge the all-too-common gap between research and reality – to see and seek to understand the lives of our participants in a way that is difficult to fully grasp through a traditional qualitative group discussion or interview. PhotoVoice showed me, as a researcher, the power of different research methods and inspired me to continue to seek out new ways to empower women who are taking important steps in changing their communities.

A comprehensive album of all of the PhotoVoice photos is available on Flickr. 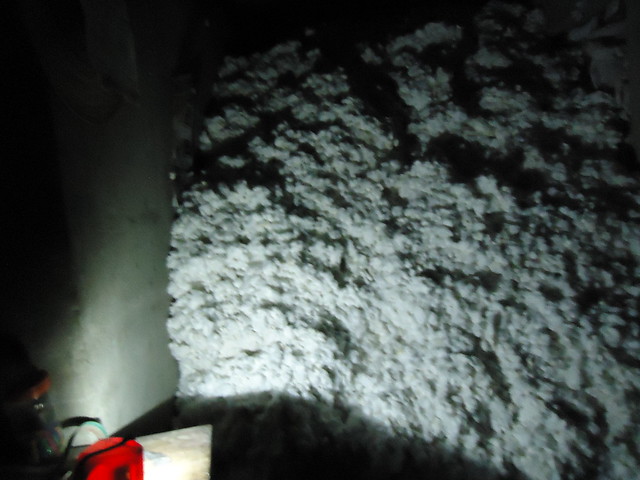 To learn more about the impacts experienced by the SSEs’ and other members of Solar Sister’s staff, visit ICRW’s website to read the full-length qualitative assessment report, “With Solar Sister, Forward We Go”: A Qualitative Assessment Exploring How Solar Sister Brings Light, Hope, and Opportunity to Women in Africa and accompanying research brief.

The partnership between Solar Sister and ICRW and the resulting qualitative assessment were made possible thanks to generous support from the State Department through the wPOWER initiative.