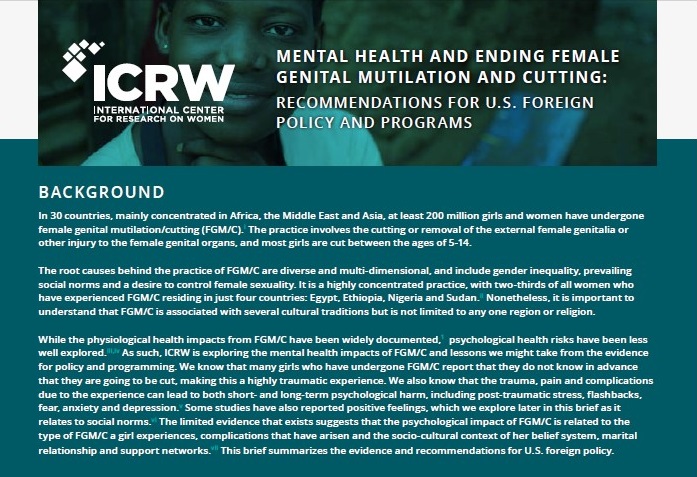 In 30 countries, mainly concentrated in Africa, the Middle East and Asia, at least 200 million girls and women have undergone female genital mutilation/cutting  FGM/C). The practice involves the cutting or removal of the external female genitalia or other injury to the female genital organs, and most girls are cut between the ages of 5-14.

The root causes behind the practice of FGM/C are diverse and multi-dimensional, and include gender inequality, prevailing social norms and a desire to control female sexuality. It is a highly concentrated practice, with two-thirds of all women who have experienced FGM/C residing in just four countries: Egypt, Ethiopia, Nigeria and Sudan. Nonetheless, it is important to understand that FGM/C is associated with several cultural traditions but is not limited to any one region or religion.

While the physiological health impacts from FGM/C have been widely documented, psychological health risks have been less well explored. As such, ICRW is exploring the mental health impacts of FGM/C and lessons we might take from the evidence for policy and programming. We know that many girls who have undergone FGM/C report that they do not know in advance that they are going to be cut, making this a highly traumatic experience. We also know that the trauma, pain and complications due to the experience can lead to both short- and long-term psychological harm, including post-traumatic stress, flashbacks, fear, anxiety and depression. Some studies have also reported positive feelings, which we explore later in this brief as it relates to social norms. The limited evidence that exists suggests that the psychological impact of FGM/C is related to the type of FGM/C a girl experiences, complications that have arisen and the socio-cultural context of her belief system, marital relationship and support networks. This brief summarizes the evidence and recommendations for U.S. foreign policy.