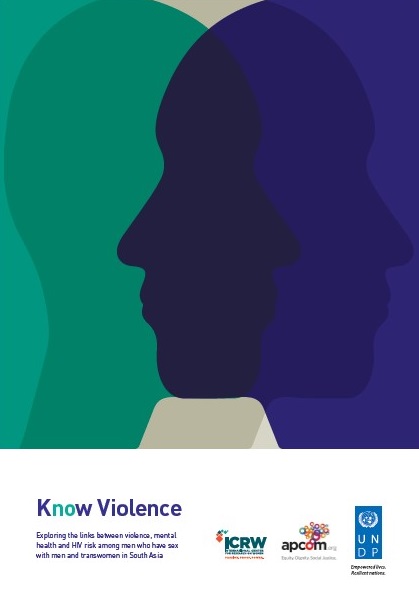 Violence based on sexual orientation, gender identity and expression (SOGIE) is a grave violation of the human rights of sexual and gender minorities worldwide. It has severe consequences for the survival, safety and freedom of gender and sexual minorities; disrupts development opportunities; and can also increase HIV risk and prevalence. SOGIE-based violence also impacts the mental health and well-being of members of sexual and gender minority groups. While there are well-documented trends in some regions of the world, less is known about SOGIE-based violence, HIV risk and mental health among sexual and gender minority groups in South Asia.

The United Nations Development Programme (UNDP) initiated this regional study to better understand the lived and perceived experiences of SOGIE-based violence among men who have sex with men and trans women in the region and to explore the effects of this violence on mental health and HIV vulnerability. The results are integral to informing evidence-based policy and program work to prevent SOGIE-based violence, reduce HIV prevalence and incidence and enhance the mental health of sexual and gender minorities in the region.

This report by UNDP, ICRW and APCOM Foundation explores these issues in seven South Asian countries – Afghanistan, Bangladesh, Bhutan, India, Nepal, Pakistan and Sri Lanka. It also provides recommendations for mitigating the effects of violence on mental health and HIV vulnerabilities through program and policy efforts.

UNDP, ICRW and APCOM (2018). Know Violence: Exploring the links between violence, mental health and HIV risk among men who have sex with men and transwomen in South Asia.

Uplift: A Conversation with Soraya Chemaly