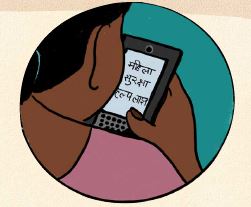 The devastating impacts of the COVID-19 pandemic have disrupted social and economic infrastructure and have further marginalized millions of people. In many ways, the epicentre of the pandemic was felt among the urban informal workers in the country, particularly women. Already existing at the edge of precarity with respect to livelihood, social security, and shelter – all of which lay on the spectrum of informality – the humanitarian crisis brought about by the pandemic further widened the fault lines of their pre-existing social and economic vulnerabilities. As the government urged people to stay at home and the economic cogwheels of the country came to a grinding halt, India witnessed one of the worst recessions since independence, with the economy shrinking by a historic 7.3% in the first year of COVID. Overnight, urban informal workers across the country lost their jobs and incomes. As a result of the loss in livelihood and income, it is estimated that about 400 million people, working in the informal economy in India, were at the “risk of falling deeper into poverty”. During this period, the number of people living below the minimum wage threshold of Rs 375 per day had increased by 230 million. 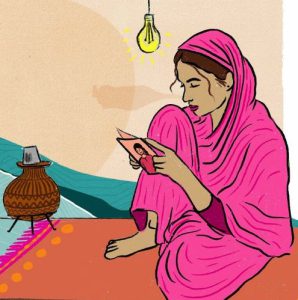 Our approach for this study has been two-pronged: one, to assess the gendered impact of the pandemic-induced lockdowns on urban informal workers in Delhi NCR; and two, to assess the overall effectiveness of the various state and non-state responses for relief and recovery. In doing so, we have also looked at the urban governance structures put in place for COVID management as well as to deliver on the policy response, along with mapping the efforts of CSOs to bring in stop-gap measures, from March 2020 to August 2021.

Our study has focussed on five thematic areas of concern, namely –

Do note that over the last few months, various Ministries have introduced several new measures meant to benefit the migrant worker population in the long-term such as the One Nation, One Ration Card scheme, the national database for unorganized workers, the two surveys launched by Ministry of Labour and Employment, namely the All India Survey on Migrant Workers and the All India Quarterly Establishment Based Employment Survey (AQEES), and the Affordable Rental Housing Complexes scheme. Before the country collectively moves on from the discourse of migrant welfare to economic recovery, which is likely to commence once the COVID infection numbers stabilize, the need for a longer-term study to assess the effectiveness of these schemes, from a gender lens, should be put in place to ensure that when the country builds back, it does not leave the vulnerable migrant and urban informal workers behind. 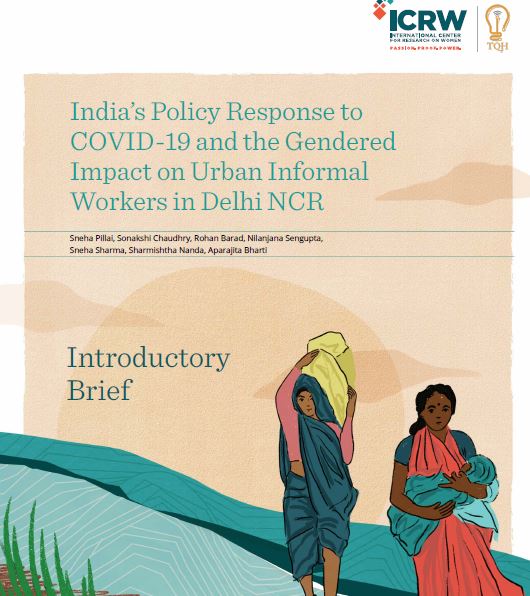 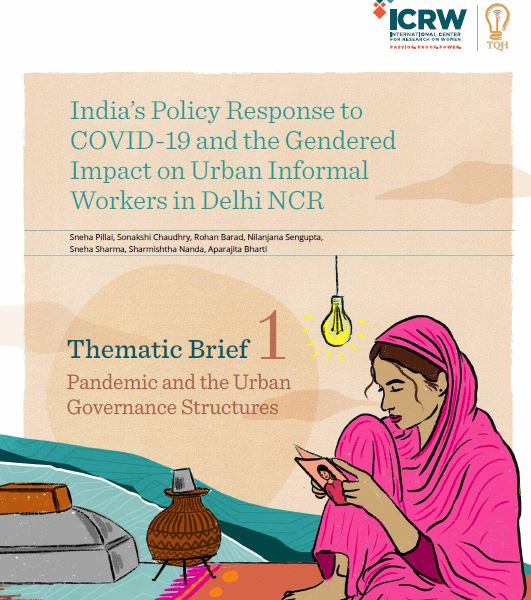 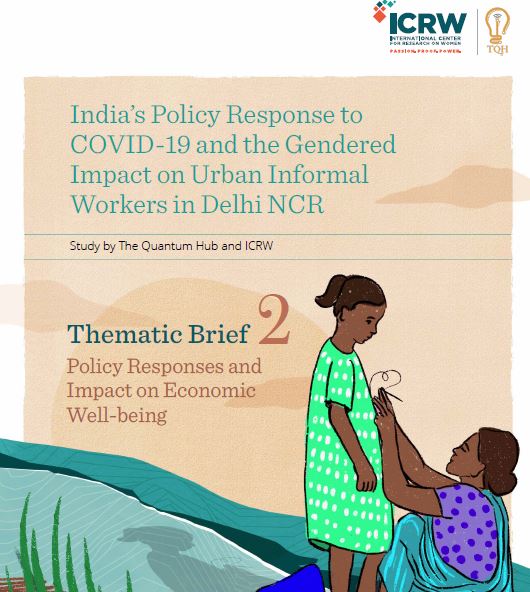 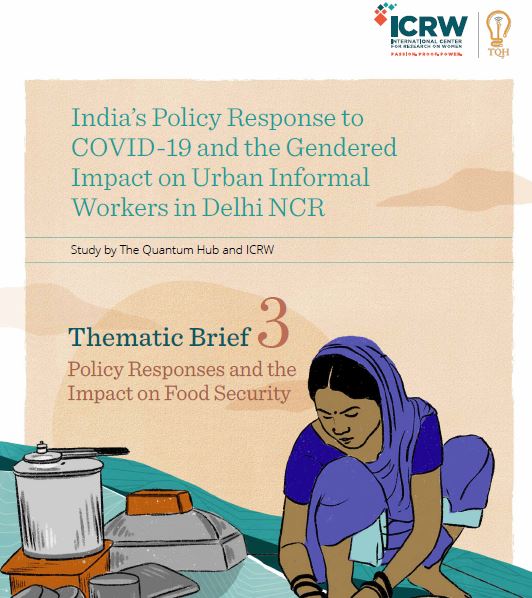 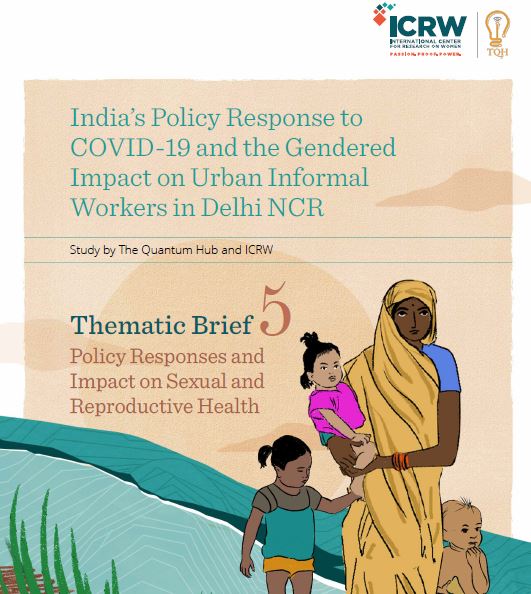 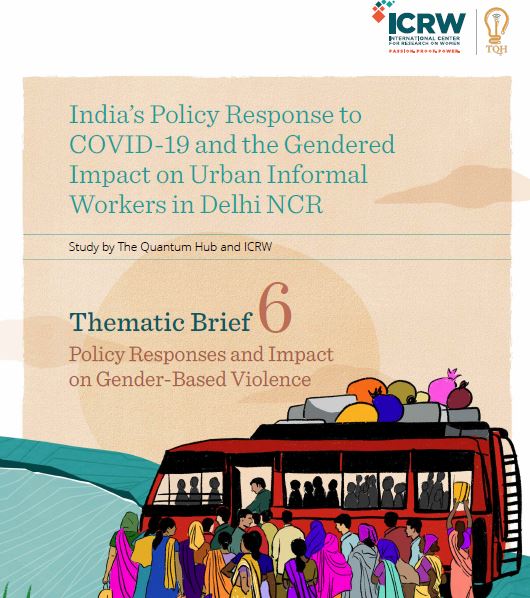 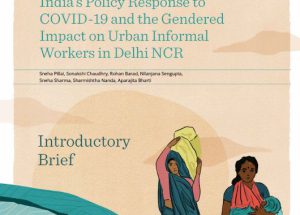 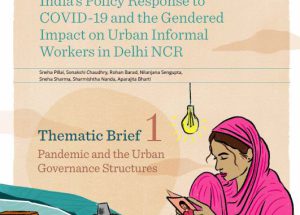 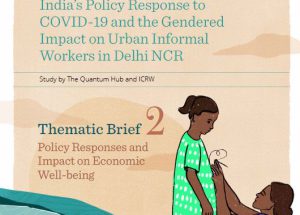 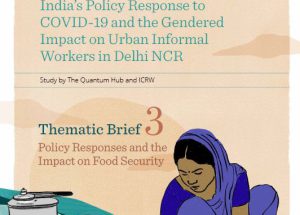 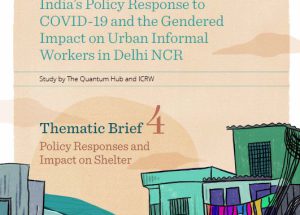 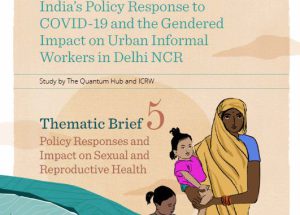 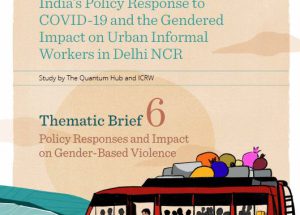 The Quantum Hub & International Center for Research on Women

The learnings documented in this publication were collated as part of a three-country research study undertaken by ICRW Asia, REBUILD: COVID-19 & Women in the Informal Economy in Kenya, Uganda & India, with the support of the Bill & Melinda Gates Foundation and the International Development Research Centre. The facts and information in this report may be reproduced/quoted/cited only for non-commercial use and with appropriate attribution.