Economic Empowerment, Employment and Enterprises, Violence Against Women and Girls 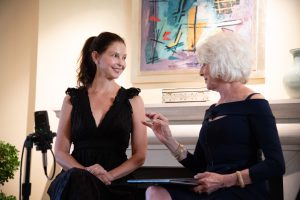 WASHINGTON (July 18)—Ashley Judd was in Washington on Wednesday to talk about #TimesUp and her work to create justice for survivors of sex-based harassment, sexual assault and abuse. She was interviewed by Diane Rehm, host of the podcast On My Mind, at a fundraiser for the International Center for Research on Women, an International Research (ICRW).

Judd addressed her decision to go public about her experiences. “I felt so securely and so deeply that I was doing the right thing, it’s a simple and straightforward as that.”

The full discussion will be featured on Diane Rehm’s podcast On My Mind, to be released on Friday, July 20.

Judd is a member of ICRW’s Leadership Council. ICRW is a global research institute whose work advances gender equity, inclusion and the alleviation of poverty. Known for its costing studies, ICRW is documenting the economic impact of sex-based harassment in the workplace.

The interview with Rehm address Judd’s longtime activism around women’s rights and her goals in creating an organization that addressed sexual harassment and abuse at all economic levels.

“My economics are different today because I resisted assault. My pocketbook is different because I’m a woman,” she went on to say. Being a woman can carry a price regardless of profession or income level. “The promotion that doesn’t materialize, the shift that’s reassigned, being passed over for advantageous overtime… those are all ways that women are punished.”

Photos from the reception are available upon request.

The International Center for Research on Women is a global research institution whose work advances gender equity, inclusion and the alleviation of poverty worldwide. Headquartered in Washington, DC, with regional offices in India and Uganda, ICRW provides research and analysis to inform programs and policies that promote gender equality and help alleviate poverty.