The United Nations defines violence against women as “any act of gender-based violence that results in, or is likely to result in, physical, sexual, or mental harm or suffering to women, including threats of such acts, coercion or arbitrary deprivation of liberty, whether occurring in public or in private life.” Despite increased efforts and investments to curb its growing prevalence, gender-based violence (GBV) continues to be a complex and pervasive public health and human rights concern that is being perpetuated in various forms and across multiple contexts and platforms.

However, with increasing access to the internet and mobile technology, GBV is no longer restricted to real-world forms of violence, but has now spilled over to the online world, with prevalence rates ranging from 33% of respondents in studies from South Africa and Kenya to 41% of adult internet users in the United States.

Similar to other forms of GBV, cyber violence also disproportionately targets and impacts women, girls and sexual minorities. Global estimates reveal that almost three quarters (73%) of women have endured some form of online violence, and that women ages 18-24 years are particularly vulnerable to severe forms of online harassment. In Europe specifically, it is estimated that nine million girls experience some form of cyber violence by age 15. Further, in the United States, although men are more likely than women to experience relatively mild forms of online harassment such as defamation and hate speech, women are more susceptible to severe forms of cyber violence such as stalking and sexual harassment. Despite its ubiquitous presence, women are reluctant to report their victimization for fear of social repercussions and one in five female internet users live in countries where online harassment and abuse of women is unlikely to be prosecuted.

Cyber violence can be manifested in several ways including stalking, bullying, sexual harassment, defamation, exploitation and murder, having severe and far-reaching implications for those who experience it. Sometimes, victims/survivors experience a combination of online and in-person violence that has compounded health, social and economic risks. Because of the increasing prevalence and adverse consequences for victims/survivors, it is imperative that different stakeholders including researchers, policy makers, technology companies and law enforcement agencies explore the structural drivers of gender-based cyber violence and develop evidence-based prevention strategies to avoid widespread harm.

Training on WEE Indicators and Toolkit for PCI 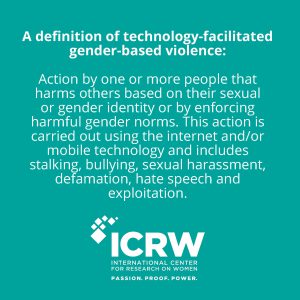 Recognizing the prevalence and severity of cyber violence, The International Center for Research on Women (ICRW) has developed a definition of and framework (below) for understanding technology-facilitated gender-based violence (GBV) – that links previously disconnected forms of harmful behaviors.

ICRW is also researching how gender plays a role in an individual’s vulnerability to technology-facilitated GBV and how it is experienced across a range of contexts globally, where women, girls and lesbian, gay, bisexual, transgender and intersex (LGBTI) individuals are disproportionately disadvantaged and targeted.

ICRW is currently conducting formative research in Uganda and India to understand what this issue looks like in each context, as well as test the associated measures we have developed. 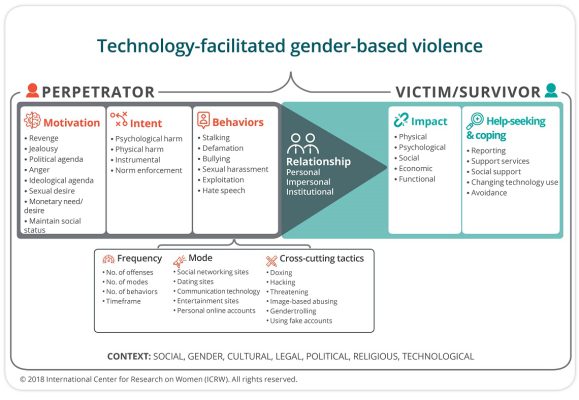 Recommended citation for the brief where the framework originated: Hinson L, Mueller J, O’Brien-Milne L, Wandera N. (2018). Technology-facilitated gender-based violence: What is it, and how do we measure it? Washington D.C., International Center for Research on Women.