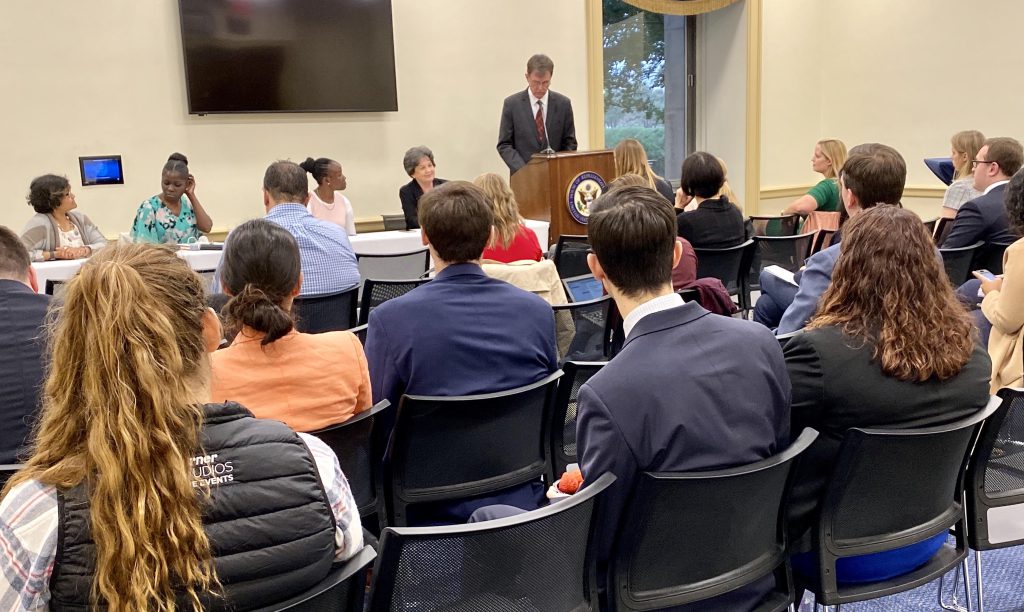 Two weeks ago, the US End FGM/C Network was joined by two Members of Congress and a senior member of the Trump Administration to discuss female genital mutilation/cutting. The event, held on October 22, 2019 on Capitol Hill, featured remarks from Congresswoman Lois Frankel (D-FL-21), who is the Co-Chair of the Democratic Women’s Caucus (DWC), and Congressman Scott Perry (R-PA-10). Also featured were Acting Director of the Office of Global Women’s Issues at the U.S. Department of State Joel Maybury; two survivors of FGM/C, FA Cole and Bayor Chantal; and two advocates from the US End FGM/C Network, Dr. Ghada Khan and ICRW Policy Advocate Rachel Clement.

As a fellow from Balochistan in Pakistan, I was both shocked and not shocked to hear about FGM/C. In my society, FGM/C is not prevalent. So, hearing about a procedure that removes all or part of the female genitals for no health reason is horrifying. However, other forms of gender-based violence and discrimination do exist in my society. For example, we have the tyrannical practice of honor killings, an act of revenge usually taking the form of a gruesome murder. These honor killings are committed by male family members against the female family member alleged to have bought shame to the family by indulging in acts of premarital or extramarital sex, love marriages and even being a victim of rape. Cultural and societal norms often prevent families from reporting such acts to the authorities, and the underlying reasoning for these killings often go unquestioned. FGM/C is not associated with any region, religion or language, but it is a social and cultural practice that dramatically impacts girls and young women worldwide.

The event opened with remarks by Representative Frankel and Acting Director Maybury, who said that advanced education and awareness programs for FGM/C prevention is highly important, as well as meeting the needs of survivors. There is a need to ban the practice domestically in the U.S. and in many other countries where it is practiced, but laws and policies alone are not enough. Therefore, funding should be made available for raising awareness of the issue, and young people should receive specific allocations of funding. These youth, in particular, need survivors’ psychosocial care to heal from post FGM/C trauma, health care for infections and other related consequences of FGM/C. Mr. Maybury raised the importance of the State Department’s annual human rights country reports that highlight published human rights abuses, including FGM/C. He announced that the U.S. Advisory Council on Human Trafficking that deals with survivors will consult and involve survivors in advocacy legislation and policy making processes, as well as recommend a policy to ban FGM/C in the U.S. Such diplomatic initiatives are a key part of U.S. efforts to end FGM/C. 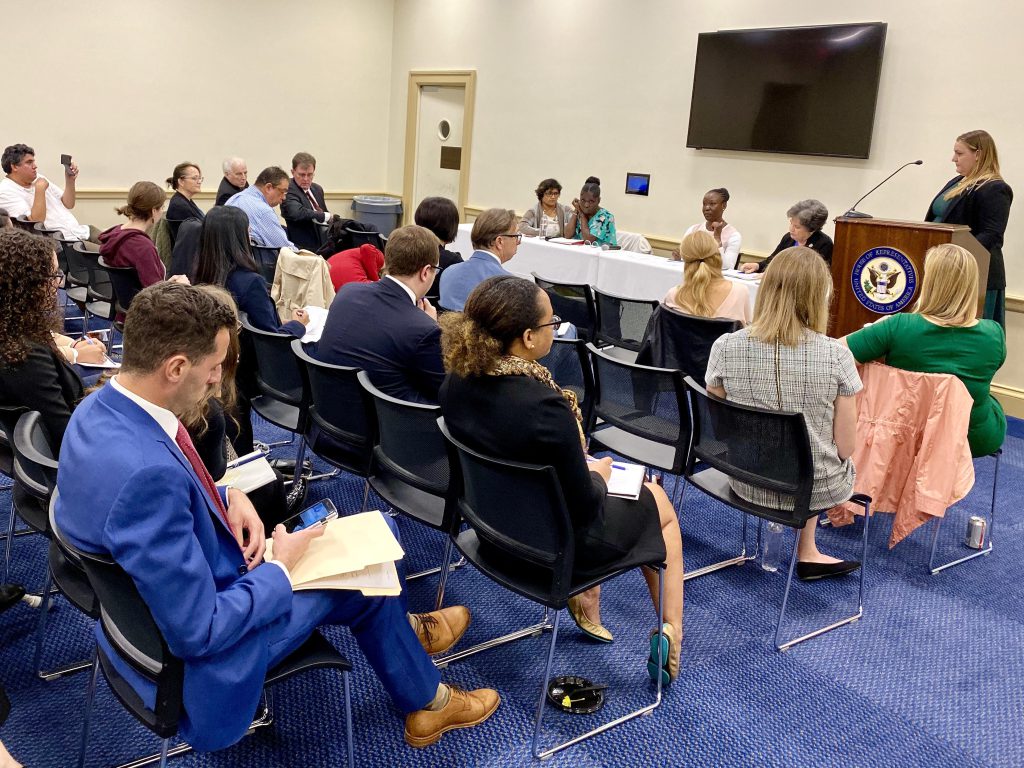 The panel event, featuring Chantal, Cole, Khan and moderator Clement was emotional. One of the speakers told her personal story, and it was clear that other panelists, as well as the audience, were all very moved by what she had been through and how FGM/C continues to impact her life today. I realized during the event that advocacy events like this have the advantage of having a real impact in a short time and have an impact, as the audience and speakers pay attention to key areas and feel connected with the purpose of the advocacy event. The US End FGM/C Network has a robust set of foreign policy recommendations that include a call for the continued appropriation of the UNFPA-UNICEF Joint Programme to Eliminate Female Genital Mutilation, which Clement noted is “one of the best contributions that the U.S. government can make to address this issue.”

Throughout the panel, Congresswoman Frankel sat in the front row alongside the survivors, which seemed to make them feel special, heard and understood so that they could talk confidently about their pain and share their experiences openly. As someone from Balochistan in Pakistan, it was interesting to see the groups working on influencing policies through advocacy, particularly having close relationships with policymakers, and to see policymakers listening to their recommendations in addition to talking about their own.

Representative Frankel talked about the need to support the mental health of survivors, and asked survivors themselves what they thought the best policy solutions might be. She and Representative Perry both highlighted the anti-FGM/C resolution they co-sponsored and introduced in February, which passed the House unanimously in May as a huge victory and vital first step in ending FGM/C.

In May, Rep. Perry stated, “We’ll continue to demand an end to the barbaric practice of FGM/C, justice for its victims, and protection for our girls.” At introduction of Perry and Frankle’s bipartisan resolution to denounce female genital mutilation/cutting (FGM/C), Rep. Frankel stated, “Today we’re sending a clear message that every girl, no matter where she’s born, has a right to live free of violence.”

At the event on October 22nd, Khan talked in length about the need for robust domestic legislation that makes FGM/C illegal, as well as the U.S. strategy to create awareness and respond to gender-based violence against adolescent girls. She proposed funds and free healthcare services for the survivors. 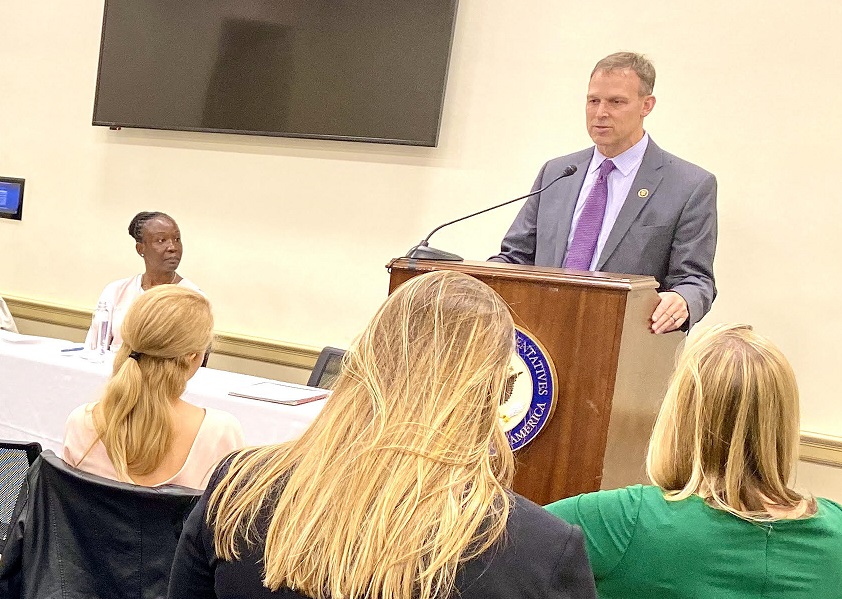 Representative Perry reiterated that there should be penalties for people who practice FGM/C. He noted his gratitude for the work on the bipartisan resolution (HRes 106) on FGM/C, which passed unanimously in the House this year and which he considers “just the beginning” of the work to end FGM/C. He added that there must be medical rehabilitation for survivors, and women must receive psychological, emotional and physical support to overcome this human rights abuse.

It was clear from the panel and the members of the U.S. Government who spoke at the event that more needs to be done to end FGM/C and to address the needs of survivors both here in the U.S. and abroad. One big takeaway for me is that we must all talk openly about about FGM/C. Currently, there is still a great taboo both in communities where it is commonly practiced and here in the U.S. We must take serious steps to ensure that the practice ends, and we cannot do that unless we make it central to the conversation.

I know that this event inspired me, and I hope others, to be advocates for survivors and to create awareness about FGM/C so that we can end the practice wherever it occurs.

The US End FGM/C Network, of which ICRW is a proud member, is a collaborative group of members that includes survivors, civil society organizations, foundations, policy makers, researchers and healthcare providers. While Clement leads the foreign policy advocacy for the Network, it is important to know that FGM/C exists in the U.S., as well. Members of many diverse communities’ practice FGM/C, which has both short-term and lifelong effects on a woman’s physical and mental health.