Achieving gender equity one classroom at a time

It’s a typical morning on a warm summer day during monsoon season at a middle school in Ranchi of the eastern Indian state of Jharkhand. Students bustle around the school grounds sporting crisp white shirts and kurtas with carefully draped maroon dupattas as the bells announce the start to second period. 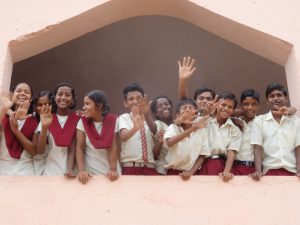 Yet the objective for today’s eighth grade class expands beyond traditional subjects of reading, writing and mathematics. For this group of twenty-five students, their task is to identify different forms of gender-based violence including emotional, physical and sexual violence. As one of 40 schools implementing the Gender Equity Movement in Schools (GEMS) program in Jharkhand, these students are working their way through the GEMS curriculum that covers topics including violence, gender equity, sexuality and life skills such as conflict resolution, communication and expression of emotions. Led by their schoolteacher and GEMS facilitator, the students energetically engage in discussion with one another during participatory group activities. While initially shy and embarrassed to speak about such issues in a co-ed classroom setting, the students shared that after several weeks of GEMS and with the support of their schoolteacher and facilitator, they felt more comfortable opening up about deep-rooted notions of gender roles and appropriate behavior to which they have been socialized at an early age. “Boys and girls should be treated equally, but sometimes girls feel scared on the way to school or in school grounds because of boys harassing them,” one female student shared. “In GEMS, we are learning how to treat each other with respect and teach our friends that aren’t in our class.”

The GEMS program was initially piloted in 2008 by the International Center for Research on Women (ICRW) as a partnership with the Committee of Resource Organizations for Literacy (CORO) and the Tata Institute for Social Sciences (TISS). Focused in Mumbai of the western state of Maharashtra, the program was implemented across 45 schools reaching approximately 2,400 students in the sixth and seventh grade. The pilot was so successful that the Maharashtra Government adapted and scaled-up the program to around 20,000 schools. Other states across the country started to take notice. In 2011, the GEMS program was initiated in 40 schools across Ranchi and Khunti districts in the eastern state of Jharkhand. An additional 40 schools were also involved as control schools where the intervention was implemented after completing a two-year evaluation of program implementation.

Using an evaluated, school-based curriculum, GEMS aims to reach students at a young age when attitudes towards gender norms, such as those around the roles and responsibilities of women and men, are formed. The GEMS model integrates classroom lessons with school-based campaigns and community outreach to promote gender equitable processes in educational institutions. In addition to the holistic curriculum, what sets GEMS apart is a commitment to guide and support all persons involved in the program. Whether it is the students, teaching and non-teaching staff in schools, program staff and community members, all are encouraged and supported to take their own journey of gender transformative thinking. As one of the objectives of the program is to institutionalize the gender transformative pedagogy of GEMS in India’s state education structure, a strong focus has been on regular, capacity building of teaching staff through intensive gender trainings. Program staff members of partner organizations including Child In Need Institute (CINI) and Life Education and Development Support (LEADS) also participate in these trainings in order to enable them to support teachers to successfully carry out the program. In a recent training just outside of the city center of Ranchi, Hemlata Verma, ICRW Senior Technical Specialist, and Gurpreet Singh, ICRW GEMS Project Coordinator, Jharkhand, led approximately 40 staff members from elementary government school and partner organizations through thought provoking and engaging activities that covered a wide variety of topics including how to avoid gender stereotypes, identify signs of child sexual abuse and engage with students in discussions on sexuality.

District Coordinator Nisha Tripathy of LEADS shared that the GEMS program has inspired noticeable change in the behavior and attitude of students as well as the school and program staff that support them. “In my personal view, GEMS has really changed me as a person and a mother. I used to beat my son occasionally for discipline, but then I recognized that this was violence and unacceptable,” she reflected. “We need to change ourselves if we ever expect to change others.” A GEMS teacher of Khunti District shared this opinion: “Before GEMS, I felt hesitant to talk with my students about issues such as body changes, violence and gender stereotypes because of the strong cultural stigma and taboos around these subjects.” After the GEMS’ teacher trainings, however, she gained the confidence to address these issues with her students.

The success of GEMS in Maharashtra and Jharkhand demonstrate the effectiveness and positive impact of the program. Observing the success of GEMS in India, schools and organizations in Vietnam and Bangladesh are adapting the program to their local context with active, technical support from ICRW. In this same spirit of encouraging schools around the world to adopt the GEMS program, the full curriculum and facilitators guide are both available online so that practitioners, teachers and parents can download and adopt the program to their local context.

For more information on additional ICRW gender equality research in educational environments, take a look at our baseline study of gender-based violence in 5 Asian countries or our evaluation of the PAGE program in India.