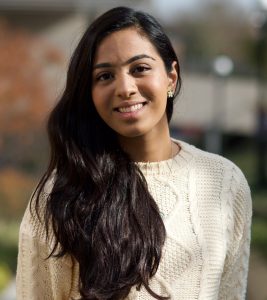 Spogmay Ahmed is a Senior Global Policy Advocate based out of the ICRW-US office, handling ICRW’s portfolio on feminist foreign policy globally and in the United States. She has also provided policy analysis and advocacy leadership in multilateral spaces, including the United Nations, G7 and G20. She previously managed ICRW’s signature Feminist UN Campaign and all associated publications. Spogmay currently serves as the North America Organizing Partner for the Women’s Major Group, promoting engagement in UN sustainable development processes.

Spogmay first joined ICRW in 2015 as a Program Assistant with the Violence, Rights and Inclusion team, before moving on to the Policy and Advocacy team as Global Policy Associate and Global Policy Advocate. Through her years of experience, Spogmay has gained a multifaceted understanding of the multilateral system – previously working with the UN Economic and Social Commission for Asia and the Pacific (ESCAP) in Bangkok, Thailand and the Permanent Mission of Pakistan to the UN in New York.