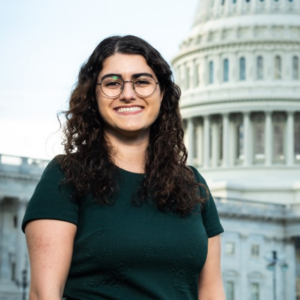 Samira Damavandi is a Global Policy Advocate based out of the ICRW-US office where she works on both global and U.S. government advocacy and policy. With over five years of experience, Samira has been passionate about gender equality, sexual and reproductive health, rights and justice, and progressive foreign policy. Her current work at ICRW includes work on the Generation Equality Forum and Sexual and Reproductive Health and Rights (SRHR).

Prior to joining ICRW, Samira worked as a Legislative Assistant to Congresswoman Barbara Lee (CA-13) for over three years where she led on various portfolio areas including appropriations, foreign policy, reproductive rights, global health, the UN, and the Congresswoman’s leadership as the Co-Chair of the Pro-Choice Caucus. While in Congress, she led the efforts on several of the Congresswoman’s key bills, the Global HER Act to repeal the Global Gag Rule and the EACH Act to repeal the Hyde Amendment. Before that, she served as a Women’s Rights Fellow through the Congressional Progressive Caucus Center.

Samira’s research has been presented at conferences in the U.K. and the U.S. and her analysis has been published in various outlets such as Al Jazeera and the Huffington Post. Her master’s thesis focused on state feminism, women’s organizations, and women’s political participation in Iran during the Pahlavi Era.