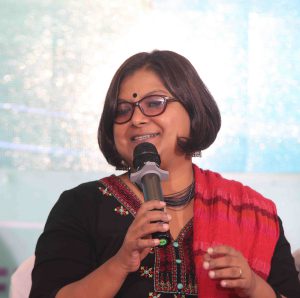 Nilanjana Sengupta is a Technical Specialist II with fifteen years of experience of working on issues of livelihoods, poverty, economic empowerment, financial inclusion and violence through a gender intersectional lens. Her specific focal areas have been labor, microfinance and governance within a gender and development (GAD) framework.

At ICRW, she handles research and programs focused on livelihoods, entrepreneurship, capacity building and institution building, among other activities. She has been engaged in designing research, preparing proposals and conducting in-depth qualitative analysis on core development issues and human rights issues, including the trafficking of women and girls. An economist by training, she also has skills in quantitative analysis.

Currently, Nilanjana is leading a project entitled Testing and Scaling approaches and interventions to support gender transformative work with NRLM (National Rural Livelihoods Mission) funded under a range of initiatives by IWWAGE (What Works to Advance Women and Girls in the Economy), established by the Bill & Melinda Gates Foundation in India. As part of the project, she is doing intensive process documentation and developing Proof of Concept of a gender transformative program implemented by partner ANANDI in Madhya Pradesh, in collaboration with the Madhya Pradesh State Rural Livelihoods Mission.

Nilanjana has taught for over a decade in well-established Indian universities and has conducted collaborative training, capacity building and research on gender, livelihoods, sexuality and violence work with NGOs and community-based organizations. She has also worked with the gender and governance team of UN Women, India Office and played a key role in developing knowledge, training and advocacy materials on gender responsiveness of institutions of local governance. She has regularly published in journals on gender and development, and her recent book Domestic Days: Women, Work and Politics in Kolkata, published by the Oxford University Press, has received notable attention.