The International Center for Research on Women (ICRW) mourns the passing of Victoria (Vicki) Sant. Vicki was a member of 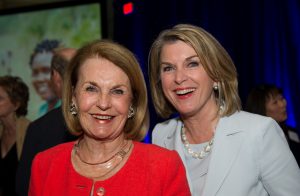 Vicki was well known in Washington, DC as a generous philanthropist for a broad range of causes. Despite her broad interests, she was a well informed and deeply committed donor and volunteer.

ICRW received support from the Summit Foundation — the family foundation created by Vicki and her husband, Roger — for our work on adolescent sexual and reproductive health and development.

“Adolescent sexual and reproductive health was one of Vicki’s passions, as was the work Summit support with youth in Central America,” said ICRW President Sarah Degnan Kambou. “She was a lifelong learner, deeply interested in the research that uncovered new pathways and solutions.”

Vicki will also be remembered for her personal contributions to ICRW, from discussions she hosted in her home to the prints of her stunning photography that decorate the office.

“What made Vicki so special was her passion, commitment and generosity of spirit,” said Kambou. “Even after she rotated off the board, she continued to be a wonderful supporter and cheerleader.

“We are grateful for Vicki’s work and friendship and we will miss her tremendously.”