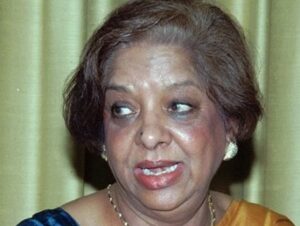 The International Center for Research on Women (ICRW) celebrates the life of Dr. Nafis Sadik, ICRW Leadership Council member and global women’s rights champion. On August 14th, Dr. Sadik died of natural causes at her home in New York City. She was 92.

Dr. Sadik, a trained obstetrician-gynecologist, studied public health at Johns Hopkins University in the 1960s. Soon thereafter, she was put in charge of a 5-year family planning program in Pakistan, and in 1971, she joined the U.N. Population Fund (UNFPA) – rising to Assistant Executive Director in 1977. In 1987, Sadik was appointed Executive Director of UNFPA – a position she held for 13 years – by then-United Nations (U.N.) Secretary-General Javier Pérez de Cuéllar. Dr. Sadik was the very first woman to direct a U.N. agency.

“Nafis was a giant and heroine for us all,” said ICRW CEO and President Peggy Clark. “Her steadfast dedication to advancing family planning, access to contraception and educational resources, women’s empowerment, and environmental sustainability in development was truly inspiring. And her fierce commitment to bringing an end to rape, incest, female genital mutilation, and other forms of violence against women and girls worldwide has been a guiding light for organizations like ICRW for decades.”

In 1994, Sadik served as secretary-general of the U.N. International Conference on Population and Development – a position to which U.N. Secretary-General Pérez de Cuéllar appointed her in 1990. At the conference, Sadik “became the architect of its groundbreaking program of action which recognized for the first time that women have the right to control their reproductive and sexual health and to choose whether to become pregnant.” The action plan was adopted by 179 countries.

Following over a decade of leadership at UNFPA, Sadik served as the U.N. Secretary General’s special envoy for HIV/AIDS in Asia and the Pacific. And in 1996, the Times of London listed Dr. Sadik among the world’s 100 most powerful women.

Dr. Sadik is survived by four children, a sister, ten grandchildren, and four great-grandchildren. Her husband, Azhar Sadik, and a fifth daughter passed away in 2011 and 2015, respectively.

“May we all live up to the example Nafis set,” said Peggy Clark. “We stand on the shoulders of those who came before us. Nafis lifted us high. We must rise higher still to break the barriers before us and advance the rights, opportunities, health, and well-being of women, girls, and all who bear the burdens of injustice everywhere. Rest in power, Dr. Sadik.”