ICRW made several commitments at the Generation Equality Forum—a civil-society centered, global gathering for gender equality convened by UN Women and co-hosted by the governments of Mexico and France.

The Forum, which kicked off in Mexico City March 29-31 and culminated in Paris from 30 June 30 to July 2 2021, brought together stakeholders to revisit the commitments outlined in the 1995 Beijing Declaration and Platform for Action and catalyze transformative action toward gender equality.

Launch of a Global Partner Network for Feminist Foreign Policy

As a key commitment under Action Coalition 6: Feminist Movement and Leadership, ICRW and partners launched the Global Partner Network for Feminist Foreign Policy as part of the official programming of the Generation Equality Forum. An official Generation Equality Forum side event featured civil society advocates and representatives of governments in the process of implementing feminist foreign policy, including from Sweden, Mexico, and Libya.

By joining the Global Partner Network, partners will encourage learning and adoption of the shared framework for a feminist foreign policy, and serve as resources to be called upon for action and advice. Partners will determine a plan of action for at least the next year, including the formation and mobilization of working groups and the commencement of semiannual meetings. Over time, the Global Partner Network will grow, discuss best practices for implementation, and propose accountability mechanisms.

ICRW as facilitator, in collaboration with the Founding Collaborative Members, commit to create a collaborative, global coalition on women’s economic empowerment (WEE) under the Economic Justice and Rights Action Coalition. This coalition will aim to build the global evidence-base on WEE, including from an intersectional and COVID-19 lens, to ensure women and girls and gender inclusion more broadly speaking are meaningfully included in build-back efforts, as well as broader economic policies. The global nature of this coalition and the breadth of expertise of its members will uniquely position it to meaningfully influence multiple spaces and mechanisms at the global and national levels, amplify and raise the voices of women in the Global South, and advance an intersectional feminist economic approach to WEE. The coalition will create a structure for all the different member organizations to share ownership across common goals and values.

On July 2, during a high-level panel on care, the Government of Mexico (represented by President of the National Institute of Women Nadine Gasman) launched a new Global Alliance for Care. The Alliance aims to “increase women’s economic empowerment by fostering the creation of care systems; promoting the transformation of gender roles; and accelerating an equitable economic recovery in the wake of the COVID-19 pandemic through implementing and/or increasing commitments and concrete actions on care.” ICRW is proud to join the Alliance alongside more than 10 governments and a group of civil society partners.

Limited social and legal provisions have made it difficult to prevent and address gender-based violence and harassment (GBVH) in the world of work. However, ILO Convention 190, adopted in 2019, offers a transformative and clear global framework to recognize the rights of all workers to live in a world free from violence and harassment. Read the policy brief.

In the context of the Generation Equality Forum, the Government of Kenya debuted in May 2021 a national roadmap on advancing gender equality and ending all forms of GBV and FG by 2026. The brief specifically outlines 12 concrete actions that comprise Kenya’s GEF commitment framework, underpinned by the following pillars outlined by the GEF GBV Action Coalition. Learn more. 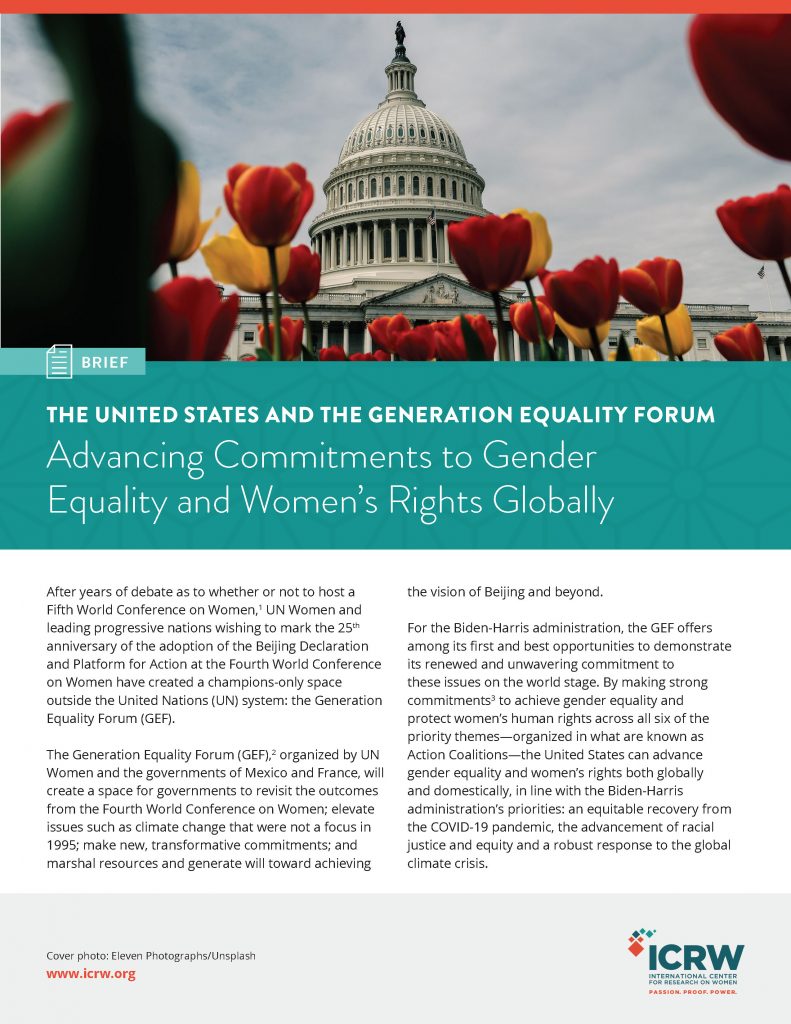 The United States and the Generation Equality Forum

For the Biden-Harris administration, the GEF offers among its first and best opportunities to demonstrate a renewed and unwavering U.S. commitment to achieve gender equality and protect women’s human rights. By making commitments across all six of the GEF priority themes—organized in what are known as Action Coalitions—the United States can advance gender equality and women’s rights both globally and domestically, in line with the Biden-Harris administration’s priorities: an equitable recovery from the COVID-19 pandemic, the advancement of racial justice and equity and a robust response to the global climate crisis. Read our recommendations for the U.S. administration and the official U.S. commitments to the Generation Equality Forum.

Ending Gender-based Violence and Harassment in the World of Work